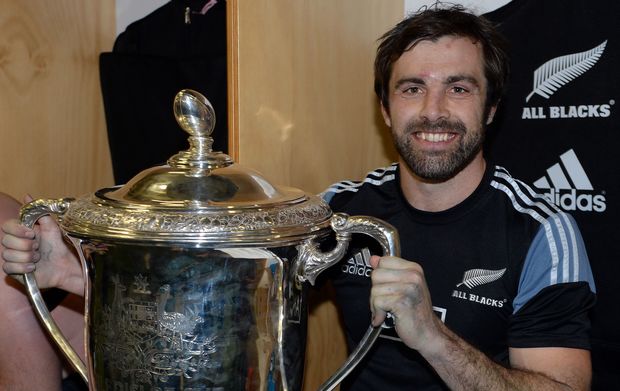 The All Blacks Conrad Smith in the dressing room with Bledisloe Cup. Photo: PHOTOSPORT

The most-capped All Blacks centre and the Hurricanes captain, Smith will leave at the end of 2015 to join French second division club Pau.

The 33-year-old has signed a two-year deal with Pau and will join them at the end of what will be his 12th season of professional rugby in New Zealand.

Several other high profile All Blacks, including Dan Carter and Ma'a Nonu, are also quitting New Zealand for France after this year's World Cup in England.

Pau are believed to be chasing several high profile players as they chase promotion to the French Top 14 competition.

Smith says it's time for a fresh challenge.

"I have loved my time playing rugby in New Zealand and really looking forward to what will be my last season here, but it feels like the right time for me move on and try something different."

"Having a stint in France will allow me to spend more time as a husband and father, which was the main motivation for me when I made the decision," Smith says.

New Zealand Rugby CEO Steve Tew says Smith exemplifies everything that is great about the game of rugby.

"He is an outstanding person, one of New Zealand rugby's most consistent players over the last decade and hugely respected by all who know him."

"We owe Conrad, and others who have represented their teams so well over many years, a great deal of gratitude."

"With his well-known background in law, Conrad has also been involved as a player representative in the Players' Collective negotiations for many years and has helped shape the current environment for all professional players."

"He will also leave a great legacy in that regard."

Tew believes Smith will return to New Zealand at some point, but in what capacity remains to be seen.

All Blacks head coach Steve Hansen says on behalf of the All Blacks, he wants to publicly acknowledge the outstanding contribution Smith has made - and continues to make - to the All Blacks.

"He is a world-class player and leader in our team and we look forward to that continuing this season."

"We in the All Blacks wish both Conrad and his wife all the very best for their new adventures next season."

Hurricanes coach Chris Boyd says they're sad to see him go, but all good things must come to an end, and they wish him well for the next stage of his life.

"Conrad's been such a committed Hurricane and Wellington Lions player over a long period of time, and epitomises what a great team man should be."

"There are not many players who have given 12 consecutive years of service to the same team, and we're grateful for everything Conrad has contributed to both the Wellington and Hurricanes set-ups."

"He'll always be a huge part of our history."

He is also the most capped Hurricanes player of all time with 110 appearances (21 tries) for the Super Rugby franchise.

In his All Blacks Test debut against Italy he scored with his first touch of the ball.

Smith became the most capped All Blacks centre in his 56th Test in 2012.