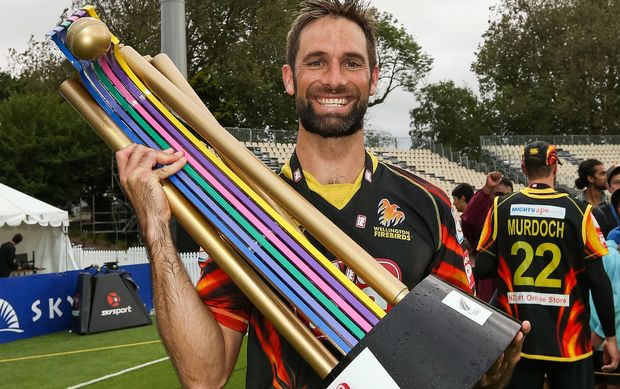 Wellington allrounder Grant Elliott is a surprise inclusion in the Black Caps world cup squad, not having played for the side since 2013. Photo: Photosport

That all changed on Thursday when he was included in the 15-strong squad for the tournament.

His inclusion comes at the expense of Otago all-rounder Jimmy Neesham.

Elliott's last one day international was in 2013 but he was part of the New Zealand A tour which went to the United Arab Emirates recently.

"There was a possibility I could be a replacement player. Seeing the Rugby World Cup, what happened with Daniel Carter and then Aaron Cruden and then all of a sudden you got Beaver kicking the winning goal and sort of always joked that maybe I'm the Stephen Donald, come in in the final, score a hundred, great dream. But I've made the 15, fantastic I will get first crack at it."

The Black Caps coach Mike Hesson says he personally delivered the message to Neesham who was part of the initial 30-strong squad named last month.

"Every player that missed out was extremely disappointed and you know this is a huge event and an event everyone of those 30 wanted to be a part of. So it's a disappointing message but it's still five weeks away and James will still play a part for the Black Caps in the future."

The veteran pace bowler Kyle Mills was also included, having recovered from a groin injury, while there was no room for Canterbury pace bowler Matt Henry.

New Zealand opens the tournament against Sri Lanka at Hagley Oval in Christchurch on February 14th.

Meanwhile New Zealand Cricket has confirmed that batsman Ross Taylor will be rested for Sunday's first of seven ODIs against Sri Lanka.