Tottenham Hotspur have provided one of the shocks of English football's Premier League season with a 5-3 home win over leaders Chelsea. 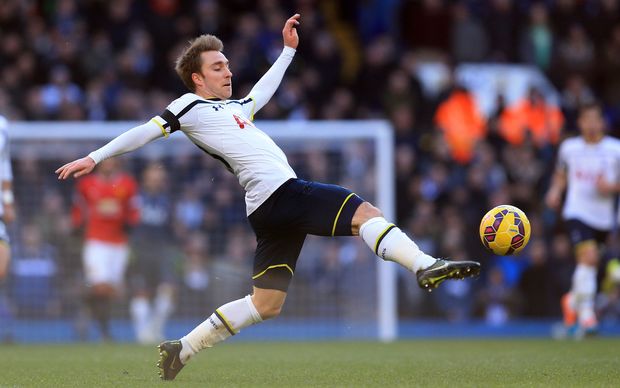 The visiting Londoners had only lost once before this season, and the scoreline is the first time Chelsea have conceded four or more goals under manager Jose Mourinho.

England prospect Harry Kane scored twice for Spurs, who will also enjoy leapfrogging arch-rivals Arsenal up to fifth, after the Gunners were shocked 2-0 by high-flying Southampton at St. Mary's Stadium. The Saints remain in the top four.

Defending champions Manchester City, who beat Sunderland 3-2, have now pulled level with Chelsea at the top of the table.

Former Chelsea star Frank Lampard scored the matchwinner for City, after it emerged he will remain with the champions until the end of the season after all, before the former England midfielder joins his new parent club New York City FC.

There were some other shock results on New Year's Day in England.

Liverpool could only draw 2-2 at home to the bottom side Leicester City, and in truth the scoreline flatters the Reds, who were gifted two penalties including a harsh call on the Foxes captain Les Morgan.

The ball hit Morgan in the face while he was sliding in for a tackle, but the official ruled it was handball.

Manchester United were held to a 1-1 draw at Stoke, but hold onto third place, while Hull City climbed further out of relegation trouble by beating visitors Everton 2-0.

Burnley played out a 3-3 draw at Newcastle United.