A stoppage-time headed goal from a heavily bandaged Martin Skrtel spared Liverpool another deflating English Premier League football defeat, as they drew 2-2 at home to Arsenal.

Inferior for most of the match, Arsenal had led with goals from French duo Mathieu Debuchy and Olivier Giroud after Philippe Coutinho had put the hosts deservedly ahead.

However, Skrtel, who required six minutes of treatment on a head wound, thundered in a late header from Steven Gerrard's corner to deny Arsenal. 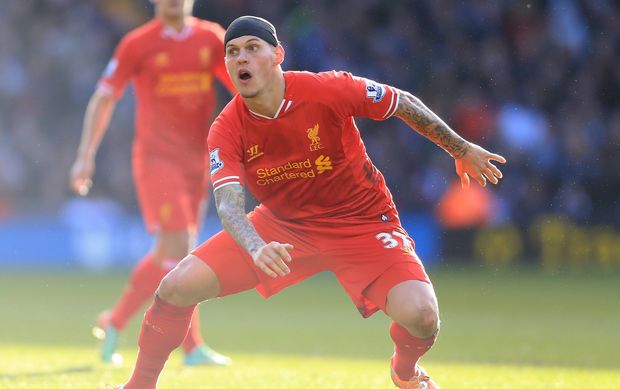 Despite failing to secure all three points, Arsenal moved back into sixth spot with 27 points from 17 games, four behind fourth-placed West Ham United.

While Arsenal have now lost just once in their last seven meetings with Liverpool, Sunderland have won four in a row against north east rivals Newcastle United after Adam Johnson's late goal earned them a 1-0 win in the day's other fixture.

A riveting Tyne-Wear derby at St James Park featured more than 30 attempts on goal but Johnson's was the only one to find the net a minute from time to give Sunderland only their third win of the season and lift them away from danger.

Liverpool, languishing in mid-table, lost 3-0 at Manchester United the previous weekend when they created chances at will.

It was a similar story against Arsenal as they completely dominated the opening half with some attractive passing.

When Coutinho finally punished a sloppy Arsenal after 45 minutes it was the least they deserved.

But the defensive gremlins that have also undermined Liverpool's season returned immediately as Debuchy headed an unlikely equaliser in first-half stoppage time.

Giroud struck what looked like being the winner after a slick Arsenal counter-attack.

Liverpool had substitute Fabio Borini sent off shortly after coming on and their cause looked lost until Skrtel's late intervention earned them a point to move them above Merseyside rivals Everton into 10th place.