West Ham United climbed up to third place in English football's Premier League - for a day - after beating eighth-placed Swansea City 3-1 on Monday. 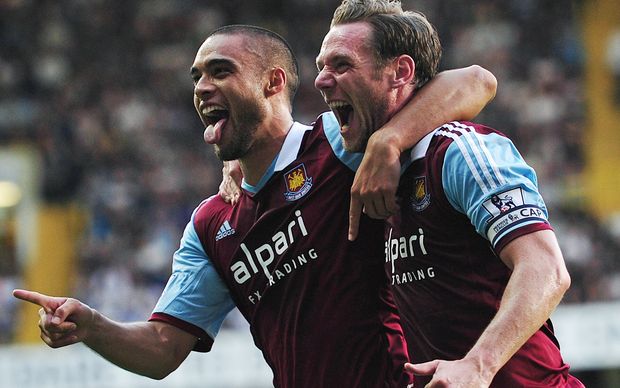 Manchester United climbed above the Hammers from fifth to third on Tuesday, after beating Southampton 2-1, who slip to fifth.

Swansea, who haven't won away since beating Manchester United in the opening game of the season, scored the first goal midway through the first half, courtesy of Wilfried Bony.

England forward Andy Carroll then returned to goal-scoring form with two goals to put his side ahead before Swansea's goalkeeper was sent off, and West Ham sealed the result with a late third goal.

Carroll, without a goal since March, headed his side level just before half-time and struck again early in the second half before top scorer Diafra Sakho lashed home a third.

All Whites captain Winston Reid plays for West Ham, one of the season's surprise packages.

Elsewhere Aston Villa also came back from a goal down to condemn bottom club Leicester City to an eighth defeat in 10 matches, Alan Hutton scoring the winner in a 2-1 victory.

Ciaran Clark equalised for the hosts after Leonardo Ulloa gave Leicester the lead with his first goal since September.

Villa are now unbeaten in five games and 11th on the table.