The Black Caps survived Shahid Afridi's late onslaught to beat Pakistan by 17 runs in the second and final Twenty20 cricket match in Dubai to draw the two-match series 1-1. 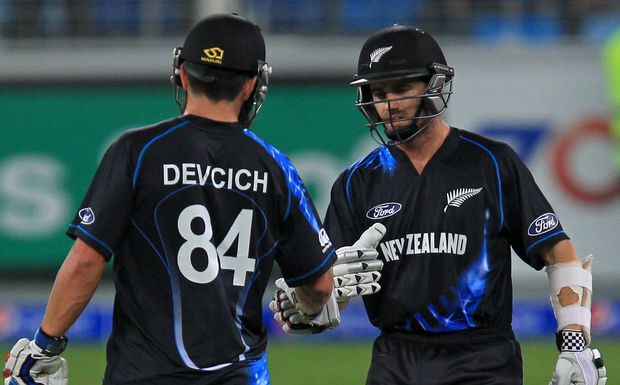 Kane Williamson and Anton Devcich make a great start as openers in the 2nd T20 in Dubai. Photo: PHOTOSPORT

Captain Afridi hit three massive sixes as he blasted 28 off 11 balls but he fell to the final ball of the 18th over and Pakistan lasted five more deliveries before being bowled out for 127.

Ahmed Shehzad top-scored with 33 but Pakistan never really recovered from slumping to 24 for three.

All-rounder Jimmy Neesham claimed three for 25, including the prize wicket of Afridi, while seamer Kyle Mills returned three for 26.

Put into bat, New Zealand got off to a strong start with skipper Kane Williamson (32) dominating a 49-run opening partnership with Anton Devcich (21), who was named man of the match.

Off-spinner Mohammad Hafeez triggered a mini collapse when he breached Devcich's defence with a quicker delivery before Afridi struck twice to peg back the Black Caps.

Afridi trapped Dean Brownlie leg before for a duck with a delivery that TV replays suggested would have missed the leg stump.

The leg-spinner then clean bowled Williamson as the Black Caps, cruising at 49 for nought in the seventh over, slid to 58 for three.

Tom Latham contributed 26 while Luke Ronchi (31) hit Afridi for two successive sixes in a 19-ball cameo to help New Zealand chalk up a competitive 144 for eight.

The two-game series is shared 1-1 after the Black Caps lost the opening match at the same ground.