Australian Open tennis organisers have tweaked their 'extreme heat policy' for next year's tournament after being accused of forcing players to perform in "inhumane" conditions during a heatwave in January.

Despite water bottles melting, ballboys collapsing and players vomiting and passing out when temperatures exceeded 40 degrees for four days at this year's tournament, play was stopped for only four hours on the outer courts.

There was a groundswell of criticism from players, mainly over the lack of transparency about when the policy would be implemented as it was entirely at the discretion of the tournament referee and not triggered by temperatures reaching a certain level. 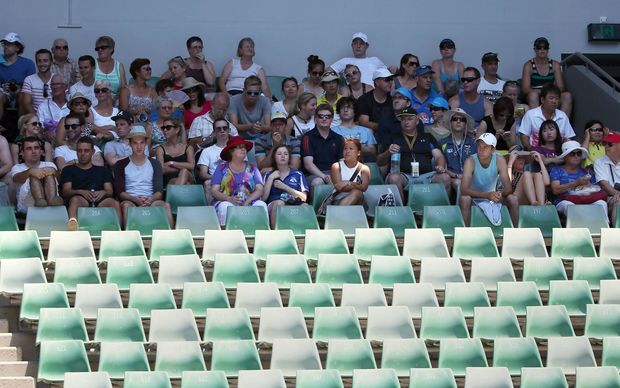 Spectators get a reprieve from the heat by sitting in the shadows at the Australian Open. Photo: Photosport

Tournament director Craig Tiley says the addition of a roof over a third showcourt, the Margaret Court Arena, will mitigate the effects of hot weather and he hoped the changes to the policy would make matters clearer to players.

He says the decision on implementing the heat policy will take into account the forecast once the ambient temperature exceeds 40 degrees Celsius.

Tiley says when conditions exceed these levels the referee is taking into account the forecast and state of play when making his discretionary call."

Rather than use the raw Celsius readings to assess the heat, organisers prefer to use the WBGT composite, which also gauges humidity and wind to identify the perceived conditions.

In another change, when the policy is enacted matches in progress will continue until the end of an even number games in that set or completion of tie break, limiting the exposure of players to the heat.

The loudest complaints in January came from Canadian player Frank Dancevic, who lambasted organisers after collapsing during his first round match on an uncovered outside court.