The New Zealand women's football team has drawn 1-1 with world number nine Norway in an international friendly match in Stavanger. 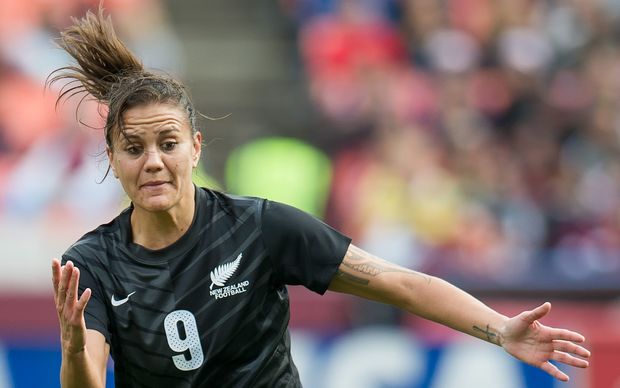 Striker Amber Hearn scored after 34 minutes, while the home side equalised in the 81st minute.

It was the 44th goal in 90 internationals for the 29-year-old Aucklander, who plies her trade for USV Jena in the German Bundesliga.

The New Zealand team, using three matches in Europe in preparation for next year's FIFA World Cup in Canada, showed improvement in retaining possession and creating chances, but a slip in concentration eight minutes from the finish thwarted what would have been a significant victory.

"We need to learn that when we are on top in these games that we take our chances and get two or three goals up and we don't let the opposition back in the game," coach Tony Readings says.

"We had the better in possession and territory. In the second half we became a little impatient and didn't keep our shape as well as we did in the first half."

While Readings wants more goals, equally he believes the team need to learn that holding a lead late in the game will be vital if they want to progress to the knockout phase in the World Cup.

"Late in the game when we are 1-0 up then sometimes that will be enough. Just keep the ball and the opposition can't score and if you win 1-0 by doing that, then great."

"Leading 1-0 will be very important in group stages of the World Cup so that's another lesson for us to learn."

Readings says his side adapted well to the indoor conditions on artificial turf which complemented the Football Ferns' approach of possession play, with short, fast passing.

He believes they produced an improved overall performance from the 2-1 loss to France on Sunday.

Hearn says the team is disappointed, despite a draw against such a high-ranked team.

"We can play against teams at this level. We had the better of the game and we should have come away with the win," Hearn says.

"The team is not satisfied these days. We expect results because we can play at this level and set high expectations for ourselves."

"We will be going out to give it everything in our final game for a win."

The final match of the Football Ferns tour is in the same venue against Norway at 7am NZ time on Friday.

New Zealand is ranked 19th in the world.