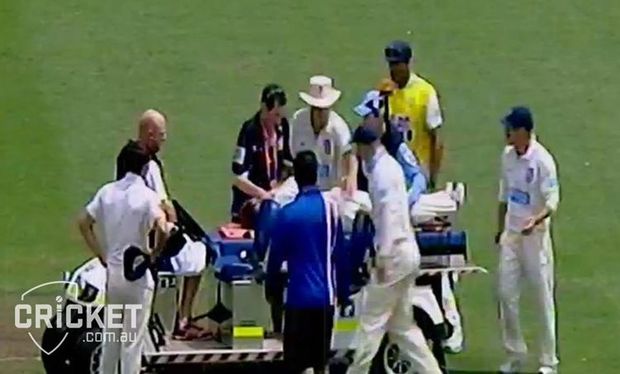 Phil Hughes being taken from the Sydney Cricket Ground on a stretcher. Photo: Cricket Australia

Hughes who's played 26 tests for Australia and was in line to play against India next week is in intensive care having had emergency surgery after being struck by a delivery at the base of his skull while batting for South Australia in a Sheffield Shield match in Sydney yesterday.

Bracken, who played alongside Hughes, says a fast bowler's intention is never to injure a batsman.

"I couldn't imagine what's going through his (Abbott's) head and how his night would have been last night.

"It would have been something that was very very difficult...because Sean was one of the people who loaded Phil onto the medicab that took him off the ground and to have that thought, that feeling that five minutes ago I was bowling a ball to him and now I'm doing this."

"It's got to be difficult and he's going to need a lot of support from players, friends and the cricket community."

Cricket Australia says players who saw Hughes collapse on the pitch will be given counselling.

Meanwhile the New Zealand captain Brendon McCullum says the injury suffered by Hughes is a reminder that dangers are part of cricket.

Hughes was rushed from the ground on a motorised stretcher.

Speaking from Sharjah ahead of the third and final test against Pakistan, McCullum says he's saddened by the injury.

"There's some dangers in this game that we play and it's not often that it happens. But it does just remind you that it can be a pretty tough game that we play as well and you can't protect everything but you just hope that it doesn't happen very often."

"You like to play the game hard but you also don't want to see people get hurt, so, our thoughts [are] with Phil and we hope he has a speedy recovery."

The 25-year-old Australian is in intensive care in a Sydney hospital and his condition is not expected to become clear for the next day or two.

"All we know is that it's serious and he's fortunate to be in the best possible place right now with experts all around him."

Fitted with a ventilator to aid his breathing, Hughes left the Sydney Cricket Ground in an induced coma, having collapsed to the ground after being hit below the back of his helmet near the base of his scull by a delivery from New South Wales fast bowler Sean Abbott.

Hughes, who had been touted to replace injured Australia captain Michael Clarke for next week's Test match against India, had scored 63 runs for South Australia in the Sheffield Shield match before being hit.

Apparently dazed by the blow, the left-hander stooped and put his hands on his knees before falling face first onto the pitch, prompting players and medical staff to rush to his aid.

Hughes was placed on a motorised stretcher and taken to the edge of the field where medical staff performed mouth-to-mouth resuscitation before he was rushed to hospital by ambulance.

After scans at the hospital, he was taken straight into surgery.

Australia captain Clarke arrived to check on Hughes at the hospital, where the stricken batsman's mother and sister were also present, Reuters reports.

News of the injury sparked a wave of sympathy from the global cricketing community and fans on social media.

"Our thoughts and prayers are with phil and his family! He is a great fighter and a great young man!" Australia coach Darren Lehmann Tweeted.

A popular team player born in a small town in northern New South Wales state, Hughes played 26 Tests and 25 one-day internationals for Australia, but never quite cemented his place in the national set-up.