Manchester United's much-maligned defence stood firm to inspire their team to a 2-1 victory at Arsenal as the visitors climbed into the top four of the English Premier League. 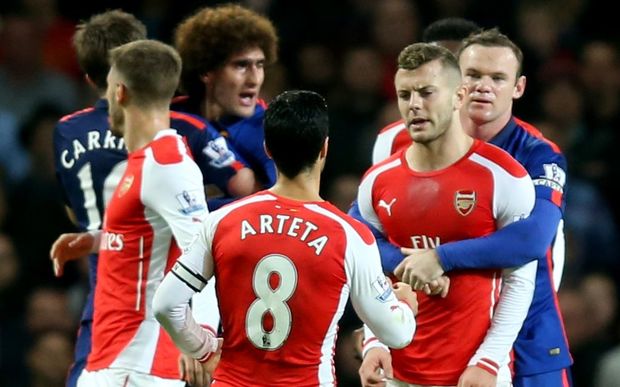 Manchester United and Arsenal players in a tussle Photo: PHOTOSPORT

Paddy McNair and Luke Shaw, both 19, and 20-year-old Tyler Blackett, started in a makeshift back four at the Emirates Stadium and after withstanding a fierce Arsenal onslaught they established a platform from which United picked off the hosts.

Shaw only lasted 16 minutes before succumbing to another injury and the arrival of England winger Ashley Young appeared to offer even more encouragement for the Arsenal attackers.

But with David de Gea rock-solid in goal and Chris Smalling marshalling the back line on his return from suspension, Arsenal ran out of ideas and United struck clinically to climb to fourth in the table.

"The defenders have done fantastically," Van Gaal told a news conference. "Blackett, McNair -- how old are they? To play against a top team like Arsenal is very difficult."

"But I have so many injured players and it is unbelievably difficult to create consistency in the team."

"Fortunately, we have a very good goalkeeper and I am used to his quality," Van Gaal said. "He is excellent on the line."

Despite savouring his first away league win as United manager at the sixth attempt, Van Gaal was not happy with his team's start.

"I was not pleased with the way we played in the first half," he said. "We gave the ball away too easily.

"I said at halftime when we keep the ball and show confidence we will create chances and we did that in the second half."

United took the lead when Antonio Valencia's fierce cross-shot was deflected into his own net by Arsenal defender Kieran Gibbs and Wayne Rooney added a late second with a dinked finish after being released on the break by Angel di Maria.

The Argentine should have added a third but he chipped the ball wide with the goal at his mercy before Olivier Giroud's stoppage-time strike gave Arsenal hope.

"It was the right moment to win and I am very happy about that," Van Gaal said.

Also this morning, Chelsea coasted to a 2-0 win over 10-man West Bromwich Albion to maintain their place at the top of the table.

Champions Manchester City stayed third after coming from behind to beat Swansea 2-1, while, the All White captain Winston Reid's West Ham United slipped out of the top four after losing 2-1 at Everton.

Newcastle United climbed to fifth with a 1-0 win over Queens Park Rangers, while Burnley climbed off the bottom of the table after beating Stoke City 2-1.