An 87th-minute equaliser from new captain Chris Wood has gained the New Zealand men's football team a 1-1 draw with China in Nanchang. 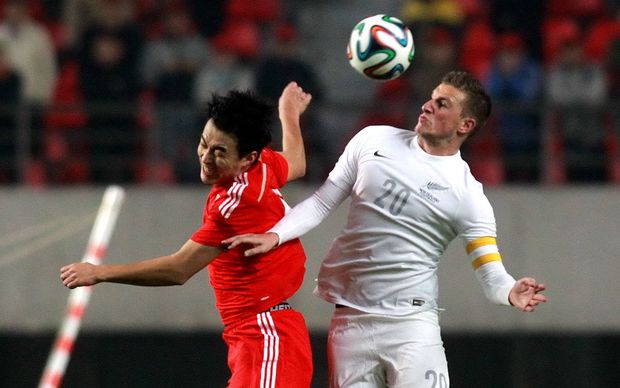 Chris Wood in aerial action in the draw with China Photo: PHOTOSPORT

The Chinese, ranked 88th in the FIFA world rankings to the All Whites' 131st, led 1-0 at half-time thanks to a superb goal in the 43rd minute from the Chinese striker Wu Lei, who slammed home a dipping left foot volley from 30 metres.

But Leicester striker and first-time skipper Wood rose well to head home for the tourists from a cross by debutant Deklan Wynne to earn the draw for his young team.

Wood, at 22, was slightly older than the average age of Anthony Hudson's squad, as the new coach looks to build depth in this international window, which also includes a game in Thailand on Wednesday.

Hudson says his young team were outstanding, and the game was a big step forward.