The world champion team sprint won a bronze medal yesterday while Sam Webster's fourth place in the individual sprint was the best result in today's final day of competition.

Despite the lack of medals, the New Zealand team did pick up qualifying points towards the Rio Olympics.

BikeNZ head coach Dayle Cheatley says the results give them a benchmark against the rest of the world.

"Yes we have some work to do. We knew that coming in but we wanted to see where we were against the rest of the world and we are quite happy where we are sitting right now."

The opening World Cup met with a fair share of challenges with an exhausting new format and a gastro bug that laid low a number of riders across several teams staying in the same hotel, including New Zealand riders Matt Archibald and Marc Ryan.

After qualifying only 16th in a remarkable session where 24 riders went under the 10 second barrier, Webster clawed his way through the repechage to ultimately earn a semifinal showdown against Olympic champion Jason Kenny.

Webster earned the gold medal over Kenny in the sprint final at the Commonwealth Games but this time the Great British rider had the top end speed advantage, as did Colombia's Fabian Puerta in the bronze medal ride.

Webster says he tried his hand at all three events which was pretty tough in this new format. "So to come away with third in the team sprint and fourth in the sprint I am pretty happy."

"Today I thought I rode tactically well but just missing a little bit of that top end speed which has always been the icing on the cake to have right come the London World Cup.

"I had ridden my keirin event before we had the final ride in the team sprint yesterday so I was a bit tired. But the other boys rode faster than in the qualifying and overall we went faster - the only team to achieve that - and we got the fastest time of the event.

Earlier Eddie Dawkins was fifth fastest in qualifying in the men's sprint with a 9.780 seconds, which was close to his best time at altitude of 9.737 seconds in Mexico last year.

However he was eliminated in first round by German Erik Balzer. 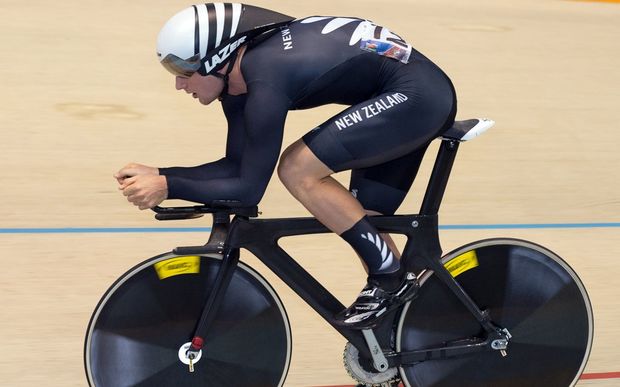 Karwowski, a former junior world team sprint champion, moved to third place with the points race remaining after second in the 1000m time trial and victory in the flying lap.

However he found the going too tough in the 40kms points race to drop back to 11th overall.

The second World Cup is in London early next month with the final round in Cali in Colombia in mid-January.