The All Blacks have remembered New Zealanders who lost their lives in the First World War as they attend a wreath laying ceremony at the New Zealand Memorial in Hyde Park in London.

Thirteen All Blacks were among those who lost their lives during the conflict.

Rugby was played at various points during the War.

Notably during a respite from Gallipoli, the ANZAC soldiers organised a game on the island of Lemnos. 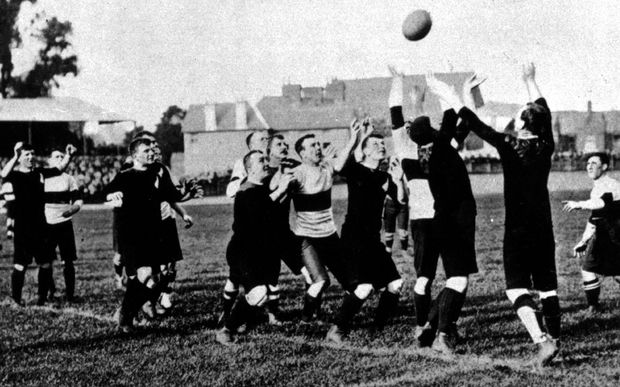 Dave Gallaher throws to a lineout. Gallaher was captain of the original All Black team represented the All Blacks 1903-1906. He was killed in battle in 1917. Photo: Photosport

They played with a football because no rugby ball could be found with the New Zealanders running in 13 tries.

The Australians managed one.

Another game was played in Paris in April 1917 against France for the Somme Cup.

The All Blacks arrived in London from Chicago where they beat the United States 74-6.

They play England at Twickenham on Sunday morning.