The Marussia Formula One team have slammed media reports that Jules Bianchi and team officials ignored safety measures before the crash that left the Frenchman fighting for his life in Japan.

The 25-year-old struck a recovery vehicle during the Japanese Grand Prix earlier this month. 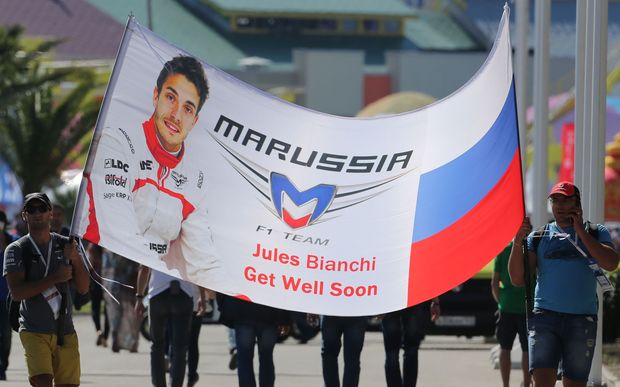 Marussia has issued a statement vehemently denying Bianchi had failed to slow down when marshalls waved double yellow flags after Adrian Sutil's Sauber had skidded off at the same spot in heavy rain.

The team also angrily rejected claims made by Germany's Sport Bild magazine citing "new information" that team officials had ordered Bianchi to speed up to stay ahead of Caterham's Marcus Ericsson at Suzuka.

The statement says the Marussia F1 Team is shocked and angered by the allegations.

"At a time when its driver is critically ill in hospital, and the team has made clear that its highest priority is consideration for Jules and his family, it is distressed to have to respond to deeply upsetting rumours and inaccuracies in respect of the circumstances of Jules' accident."

Bianchi was taken to a local hospital and underwent emergency brain surgery. He remains in a stable but critical condition, with his family continuing to hold a vigil by his bedside.

"Regarding point 1, Jules did slow down under the double waved yellow flags. That is an irrefutable fact, as proven by the telemetry data, which the team has provided to the FIA.

"Regarding point 2, an audio copy of the full radio transmission between Jules and the team, and a written transcript, were provided to the FIA.

Race director Charlie Whiting has said Bianchi did slow down as required, without specifying by how much. Waved yellow flags mean drivers must slow and be prepared to stop if necessary.

Formula One is considering imposing automatic speed limits as part of future safety measures to avoid a repeat of Bianchi's accident.

The critically injured French Formula One driver Jules Bianchi will not give up his fight for life but the situation remains desperate, his father Philippe says.

Speaking to Italy's Gazzetta dello Sport newspaper in Yokkaichi, Japan, where the Marussia driver is in intensive care, Bianchi senior said he still had hope he would be able to take his son home one day.

"The situation is desperate. Every time the phone rings we know it could be the hospital to say Jules is dead," he told the newspaper.

"But first they said the first 24 hours were crucial, then it became 72 and now we are still here, with Jules who is fighting."

"I see it, I believe it, I speak to him, I know he hears me. The doctors have said that is already a miracle, that nobody has ever survived such a serious accident. But Jules does not give up."

Bianchi has been in hospital since he crashed into a recovery tractor in the wet at the Japanese Grand Prix on October 5th.

He has been in a 'critical but stable' condition ever since.

The driver's parents, brother and sister have been at his bedside for the past week while representatives of Ferrari and Marussia have also been on hand.

The Gazzetta said FIA medical commission president Gerard Saillant and Italian professor Alessandro Frati, who flew to Japan after the crash, had returned to Europe after assuring the family that Bianchi was getting the best possible care.

The driver's father said the family were living a nightmare, in unfamiliar surroundings and without knowing what the future might hold.

"Maybe when Jules is better... we can move him to Tokyo and things will be easier. But who knows when that will happen, if it happens. We have no certainties, we can only wait," he said.

"One day he seems a little better, another a bit worse. The doctors don't say, the damage in the impact was great but they don't know how it will evolve."

Philippe Bianchi said he took hope from the case of seven-times world champion Michael Schumacher, who suffered a severe head injury while skiing in France last year and is now being treated at home.

"Even with Schumacher it took months before he came out of the coma, but I have read that Jean Todt hopes he could have a nearly normal life. One day I hope to be able to say the same."

He thanked Formula One drivers for their support, with all of them standing in a silent circle before last Sunday's Russian Grand Prix in a mark of respect for their stricken colleague.

"So many people have written to me, I will reply," he said. "(Jean-Eric) Vergne, (Fernando) Alonso, (Felipe) Massa have had strong thoughts. (Lewis) Hamilton sent a lovely email saying if he could do anything he was there for us."

Formula One officials have prepared a report into the accident and have made safety proposals, including automatic speed limits and possibly equipping the recovery tractors and cranes with 'skirts' in future.

Former world champion Alain Prost has been particularly scathing about the use of such recovery vehicles, telling reporters in Russia at the weekend he was furious about what had happened.

"I don't want to make any polemics with the FIA, because I have a lot of respect for what has been done in terms of safety over the past 20 years," said the Frenchman.

"It is cars and tracks (that have been made safer) and there was only one thing left: It was this... truck on the track."