The New Zealand Breakers have started their ANBL basketball season in the best possible way, stunning the defending champion Wildcats 80-70 in their opening match in Perth. 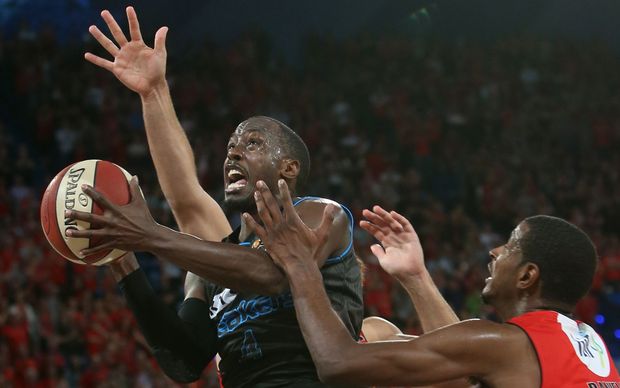 The victory came on the back of a stunning first half effort that gave the visitors a near unassailable advantage as they held off the fast finishing Wildcats.

The visitors started with hot hands, shooting at 60 percent from the floor in the opening quarter and making all three long range attempts, two coming from Rhys Carter who came off the bench with 9 first quarter points and 2 assists to help the visitors to a 28-14 first quarter lead.

The only concern at that point for Coach Vickerman was the two early fouls picked up by Mika Vukona, one a contentious offensive charge call into a more than compliant Jesse Wagstaff who hit the floor with more ease than you might expect for a man of his considerable size.

The Wildcats upped the intensity in the second quarter, clogging the paint and forcing the Breakers into tougher shots.

That was coming at a cost though, with key players Damien Martin and Shawn Redhage having to sit before the break with 3 fouls apiece.

It also hurt the Breakers though with Corey Webster taking a shot to the lower back, forcing him from the floor to seek attention from the physio.

The Breakers though made the most of the absence of the two Wildcat lynchpins, piling on the final 8 points of the half in a frantic final 90 seconds with Carter again to the fore with a long range bomb.

Guard Cedric Jackson also had a dozen first half points on 4 of 6 shooting as the Breakers led at the main break 49-26.

The Wildcats run was always coming and they started and finished the third quarter on fire to head into the final quarter trailing by just 9, opening with a 9-2 run and closing with 5 points in the final few seconds on the back of a Daniels dunk and a Hire 3 pointer off a sloppy Breakers turnover on the inbounds.

The Breakers were undermanned with Corey Webster not returning from his back injury and he was soon joined by Ekene Ibekwe who had to sit down with 7 minutes still to play as the import picked up his 5th personal.

The surge from the Wildcats was proving irresistible however, with Daniels leading the way and with Redhage and Martin back on the floor the home team slowly but surely edged back towards the Breakers, the home crowd going crazy as the margin came down to 5 points inside the final 2 minutes.

Jackson stalled the run with an amazing dribble penetration and drive to the basket through heavy traffic to extend back out to 7 with less than a minute to play.

But Perth don't lose many games, let alone lose games without a fight and a couple of Matt Knight free throws brought it back to 5 with 43 seconds to play.

Perth started putting the Breakers to the line with quick fouls and Wesley was the first, making 1 of 2 for a 6 point lead with 38 seconds remaining and Perth possession in what was still just a two possession game.

From the next play the Wildcats went looking for a 3 but Reuben Te Rangi blocked the shot and was then released for a fast break dunk by Jackson to extend to 8 points and suck the air out of the stadium.

Jackson then stole possession and sent Carter away for an uncontested layup and the game was done and dusted for a superb first up win, all the more impressive given it was achieved without Tom Abercrombie, Corey Webster did not play the second half at all and Ekene Ibekwe sat down with 7 minutes to play with 5 fouls.

The Breakers will now return home to reassess the injury count and prepare for their first home game on Friday night at Vector Arena, on a night when they will celebrate the career of CJ Bruton, retiring his number 23 to the stadium rafters.