The Kangaroos coach Tim Sheens has dismissed burnout as being a problem for Australian players ahead of the upcoming Four Nations rugby league competition.

The Sydney Roosters pair of Roger Tuivasa-Sheck and prop Jared Waerea-Hargreaves told Kiwis coach Stephen Kearney they were unavailable for the tournament citing burnout after the NRL season.

Waerea-Hargreaves was surprisingly left out of the Kiwis squad for the one off test against Australia earlier this year.

But Sheens says injury is the only reason any players are missing from the Kangaroos squad.

"About 80 percent of the players who have dropped out have been forced to drop out from us because of shoulder surgery..so it's been a tough year on the back of a world cup. But I don't think in six years I've had anyone say to me I'm too tired to play for Australia."

The 26-year-old Warriors prop Suaia Matagi who spent three years in prison as a teenager for assault will make his test debut alongw with the player billed as the next Sonny Bill Williams, North Queensland Cowboys second-rower Jason Taumalolo.

The 21-year-old Taumalolo grew up in Auckland, before moving to Townsville when he was 12 after being scouted by the Cowboys while playing for a New Zealand under-16 side.

The 19-year-old Penrith winger Dallin Watene-Zelezniak who only made his NRL debut in April and is the great grandson of former Kiwis captain Steve Watene is also included in the squad.

The other newcomer is the Cronulla winger Sosaia Feki. 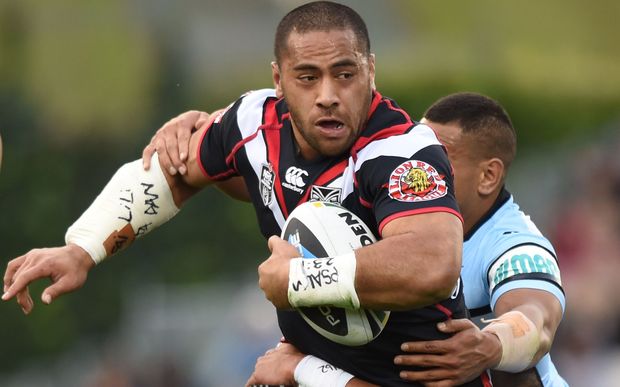 Unavailable due to injury were Konrad Hurrell and Ben Matulino.

The South Sydney hooker Isaac Luke, who missed the NRL final due to suspension, has been included but won't be play the tournament opener against Australia in Brisbane in just over two weeks as he serves the remainder of his two game suspension.