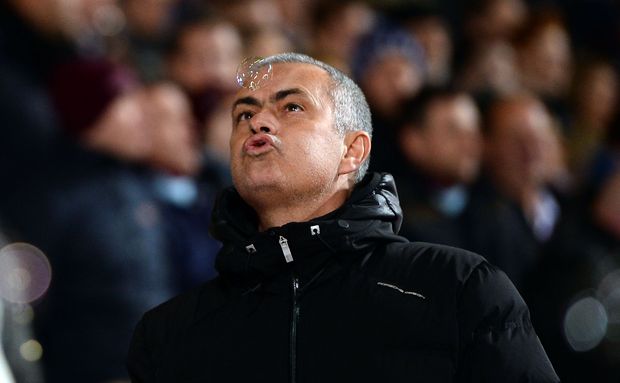 Jose Mourinho, Manager of Chelsea blows away a bubble prior to kick off. 2014. Photo: PHOTOSPORT

Leaders Chelsea won the match, Mourinho's side beating Wenger's Arsenal 2-0 to extend their advantage at the top of the table to five points over defending champions Manchester City.

Wenger could face disciplinary action after shoving Mourinho in the chest midway through the first half after a heated exchange of views.

It was Mourinho, once again, who had the last laugh though with goals from Eden Hazard and Diego Costa securing the win.

Mourinho is yet to taste defeat when up against Wenger, winning seven and drawing five of their clashes.

Chelsea were not at their best but for all Arsenal's possession they rarely looked like replying once Hazard had earned and converted a 27th minute spot kick.

The hosts appeared content to sit back in the second half until former Arsenal skipper Cesc Fabregas, up against his old club for the first time since returning to the Premier League from Barcelona, sent Costa clear with 12 minutes remaining to wrap up the points.

Costa had been quiet throughout but took his tally to nine league goals in seven matches for the Blues.

The only worry for Chelsea was a first-half head injury to keeper Thibaut Courtois who soldiered on for a while before being replaced by Petr Cech.

After a 15-minute delay caused by an incident with a flare outside the stadium, the opening half proved a feisty affair.

Arsenal began in confident fashion with Alexis Sanchez having the first shot in anger.

The Chilean was in the thick of the action minutes later when stretching to reach a Jack Wilshere through ball he accidentally clattered into Courtois.

Sanchez was then on the receiving end of a hefty challenge from Gary Cahill that had Wenger incensed and storming into Mourinho's technical area.

When Mourinho confronted the Frenchman, Wenger offered a two-handed shove into the chest of the Portuguese who last season described his rival as a "specialist in failure".

Wenger was lucky to escape punishment from the referee but the incident raised the decibel level in the stadium and appeared to spark the hosts into life.

Shortly after a still groggy Courtois was helped off, Chelsea took the lead.

Hazard's swerving run was ended abruptly by Laurent Koscielny for a penalty that the Belgian fired into the bottom left corner of Gunners keeper Wojciech Szczesny's goal.

Arsenal playmaker Mesut Ozil flitted in and out of the game and ironic home cheers greeted one tackle on the German by Fabregas who displayed calm authority throughout an often tetchy afternoon.

Chelsea went close to extending their lead after the break when Hazard's low cross was almost sliced into his own goal by Mathieu Flamini.

Any hope Arsenal had of salvaging a point were dashed, however, when Fabregas, perhaps lucky not to concede a penalty earlier when he blocked Wilshere's shot with his arm, lofted a ball forward for Costa to race clear and lob Szczesny.