Rafael Nadal has had his return to tennis halted in the quarter-finals at the China Open by Slovakia's Martin Klizan, while world number one Novak Djokovic set up a mouth watering semi-final against Andy Murray in Beijing. 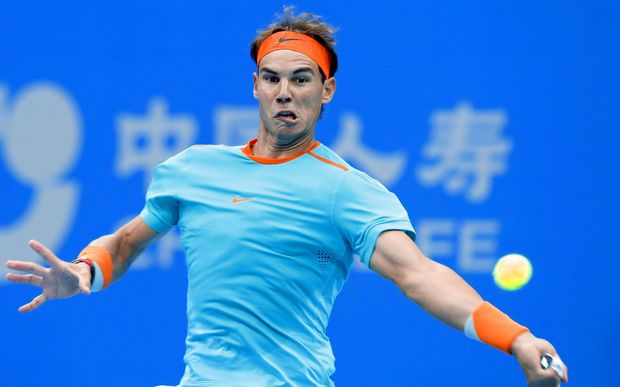 Rafael Nadal's been knocked out in the quarters in Beijing Photo: PHOTOSPORT

Nadal was playing his first tournament after a wrist injury since losing at Wimbledon, but the Spanish great ran out of steam against the aggressive Klizan who won 6-7 6-4 6-3 to claim the biggest scalp of his career.

Earlier, Djokovic continued his march through the draw to set up a mouth watering semi-final against Murray.

The Serb, who's looking for a fifth Chinese title, dismantled Bulgarian Grigor Dimitrov 6-2 6-4 while the Scot Murray maintained his quest to qualify for the ATP World Tour Finals when he stormed past US Open champion Marin Cilic 6-1 6-4.

In the women's draw, top seed Serena Williams was forced to pull out through injury, the American world number one handing Australian Sam Stosur a walkover, while Maria Sharapova destroyed Svetlana Kuznetsova in an all-Russian women's quarter-final.

It was the second tournament in a row Williams, who won her 18th grand slam singles title at the US Open last month, had been forced to withdraw after the 33-year-old quit her opening match at the Wuhan Open last week because of illness.

French Open champion Sharapova crushed Kuznetsova 6-0 6-4 in an hour and 24 minutes to set up a semi-final clash with former world number one Ana Ivanovic.