The suspended South Sydney hooker Isaac Luke will be able to join in with any celebrations by his Rabbitohs team-mates should they win Sunday's NRL grand final against Canterbury.

However the Kiwi international won't be part of the trophy presentation ceremony.

Luke was initially to be banned from holding up the trophy or being on the field post-match at Sydney's ANZ Stadium following his suspension for a lifting tackle on Sydney Roosters Sonny Bill Williams. 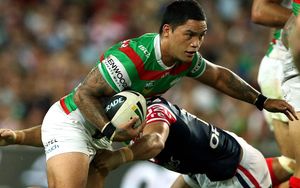 NRL rules state suspended players cannot enter the field of play before or after the match.

However, the NRL have relented and will allow Luke to appear in the official team photo and lap of honour should his side win their first Premiership in 43 years.

The Bulldogs skipper Michael Ennis is also in line to miss the game with a foot injury but will be allowed to join his side on the podium and raise the trophy if they win the game.

The NRL chief executive Todd Greenberg says they'd come to an arrangement with South Sydney to make a replacement ring should Luke be given one by a team-mate.

Meawnhile the game is a sellout.

Last year's decider between the Sydney Roosters and Manly attracted a crowd of 81,491.

Melbourne Storm's victory over St George Illawarra in 1999 still holds the record for the biggest grand final attendance, with 107,999 filling ANZ Stadium in its expanded configuration for the Sydney 2000 Olympic Games.