European golfers tightened their grip on the Ryder Cup, stretching their lead over the United States to 10-6 after Saturday's foursomes and fourball matches at Gleneagles. 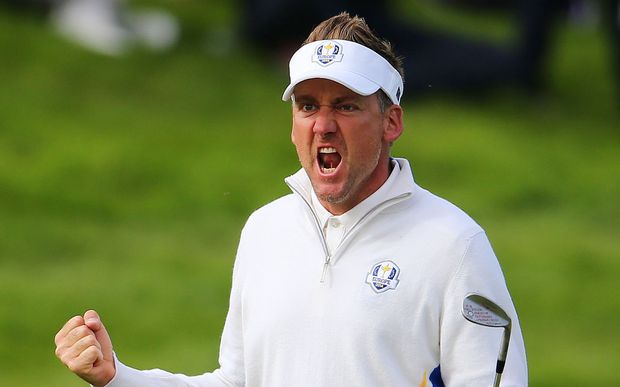 The holders outscored the US 3 1/2 to 1 1/2 in afternoon foursomes for the second day in a row, the final blow a six-foot birdie putt by Justin Rose allowing him and Martin Kaymer to halve with unbeaten US rookies Jordan Spieth and Patrick Reed.

It left Tom Watson's American squad needing to match the greatest comeback in Ryder Cup history to take the trophy.

Europe need only 14 points to keep the trophy and are in a strong position to win for the sixth time in seven tries and eighth time in the past 10 Cups.

But both sides are mindful the deficit can be overcome.

The Americans lead the all-time rivalry 25-12 with two halved.

A two-foot par putt miss by Reed at 16 squared the pivotal match but a bogey at 17 ended Europe dreams of an unprecedented foursomes sweep.

Rose found a bunker at 18 but Kaymer blasted out to six feet and Rose made the putt to stay undefeated after three earlier pairs wins.

The US duo had halved three prior matches but Fowler remained winless in Cup play.

followed with a 3 and 2 triumph over Jim Furyk and Hunter Mahan.

Electrifying early foursomes matches set an epic shotmaking tone, with Rose and Henrik Stenson combining for a Cup-match record 12 birdies, including closing with 10 in a row, to defeat Matt Kuchar and Bubba Watson 3 and 2.

The combined 21 birdies by both duos was also a Cup record.

Rose and Sweden's Stenson, who sat out the later session with a tight back, each had five birdies in the closing run, the Englishman making seven in all.

Poulter pitched in for a birdie to halve the 15th and made a birdie putt to win the 16th and square the match, the captain's pick re-energized to his chest-thumping, arm-pumping peak after struggling early.

The result blunted a US fightback that saw Furyk and Mahan beat Donaldson and Westwood 4 and 3 while Spieth and Reed downed Kaymer and Thomas Bjorn 5 and 3.