The world's top-ranked golfer Rory McIlroy will have a chance to show Phil Mickelson how strong European teamwork can be in the opening matches at the Ryder Cup starting tonight at Gleneagles in Scotland. 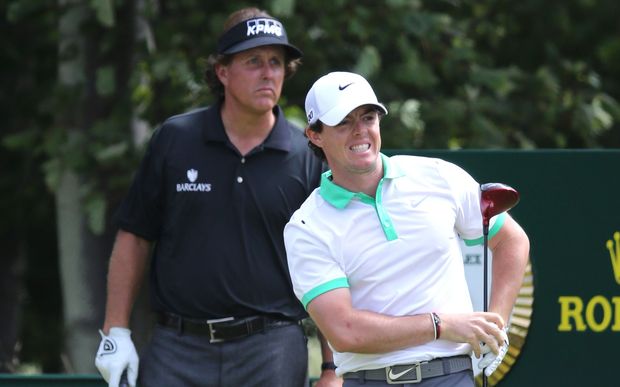 Rory McIlroy and Phil Mickelson on 9th hole during the first round of the 142nd British Open Championship. 2013. Photo: PHOTOSPORT

A day after Mickelson poked fun at the British Open and USPGA champion McIlroy and his Northern Irish mate Graeme McDowell, they were paired against each other in one of the first matches of the US-Europe showdown.

Yesterday Mickelson suggested their could be some lingering ill-feeling between the two Northern Irishmen regarding legal action taken by McIlroy against his former management company, one still used by McDowell.

The Northern Irishmen, who played together at the past two Ryder Cups, are on opposite sides of a legal dispute involving their former management company.

Asked about the US team's perceived lack of togetherness in past Ryder Cups, Mickelson said: "Not only are we able to play together, we also don't litigate against each other. That's a real plus."

The European team is playing down the suggestion, however captain Paul McGinley has suggested he might break up the McIlroy-McDowell partnership for their defence of the trophy which starts tonight at Gleneagles in Scotland.

McIlroy and Spain's Sergio Garcia will face Mickelson and Keegan Bradley in the opening four-ball matches.