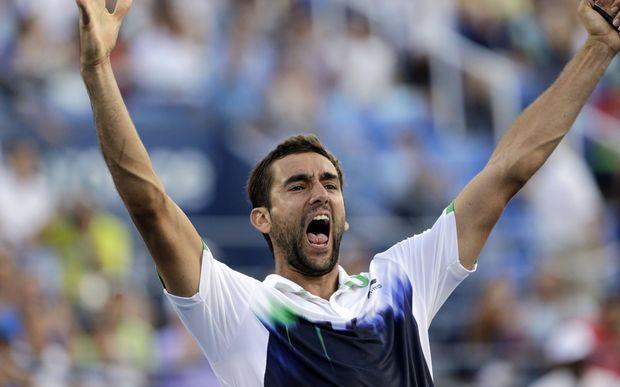 Winner of the US Tennis Open Marin Cilic, who a year ago was serving a drug ban. Photo: PHOTOSPORT

The Croatian 14th seed will meet the 10th seed Kei Nishikori of Japan in the final, who sent world number one Novak Djokovic out of Flushing Meadows with a stunning 6-4 1-6 7-6(4) 6-3 victory.

The powerful 6-foot-6 (1.98 m) Cilic had lost all five previous meetings with the Swiss master but was in charge from the outset, with his booming service game and heavy groundstrokes which Federer failed to find an answer for.

Cilic completed his dismissal of second seed Federer with three aces and a sizzling backhand winner up the line as he served a love-game to finish a fast one hour 45 minute demolition of the grand slam king, 6-3 6-4 6-4.

"Just amazing day for me," said Cilic, who smashed 43 winners, including 13 aces.

"To be able to play like this I never dreamed of. I think today was my best performance ever in my career."

Federer said the reason for his defeat was not complicated.

"I maybe didn't catch my best day, but I think that was pretty much it in a nutshell."

Cilic was playing in his second grand slam semi-final after reaching the last four in the 2010 Australian Open, while fellow giant-killer Nishikori was in unchartered slam territory.

Federer was broken in startling fashion in the fourth game of the match after taking a 40-love lead on serve. After four winners and one of his own errors, Cilic suddenly led 3-1 and used his blistering delivery to serve out the set.

The confident Croat then broke Federer in the first game of the second set and served it out to leave the Swiss on the brink.

Federer, who overcame a two-sets deficit to beat France's Gael Monfils in the quarter-finals, broke to lead 2-0 in the third set but Cilic dashed his hopes of another epic comeback by breaking right back.

Two big Cilic winners in the seventh game sealed another break leaving him well on his way to victory.