Cristiano Ronaldo struck twice as Real Madrid, featuring the most expensive strikeforce ever assembled, powered to a 2-0 win over Sevilla in football's all-Spanish UEFA Super Cup at Cardiff's Millennium Stadium. 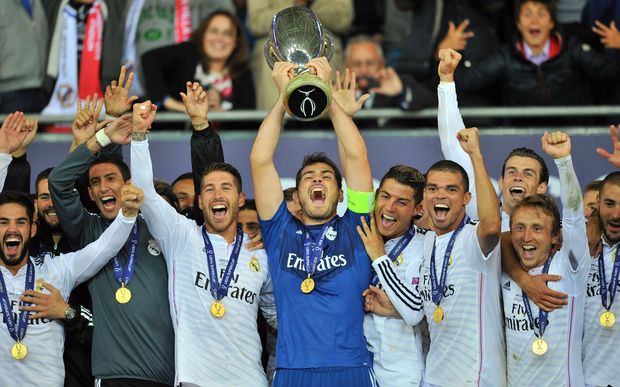 Real, starting with eight of the team that won the Champions League last season, were predictably the better side in the annual curtain-raiser to the European club season and were far too strong for Sevilla, the Europa League winners.

Ronaldo put Real ahead in Cardiff after 30 minutes when he converted a sublime pass from returning Welsh hero Gareth Bale, the world's most expensive player, and the Portuguese winger made it 2-0 with a fierce left-foot shot after 49 minutes.

Real's front four of Bale, Ronaldo, Colombia's James Rodriguez and Karim Benzema, who cost a total of about $NZ540 million, could easily have scored more as the Madrid side won the trophy for the first time since 2002.

The opening goal, started and finished by Ronaldo, deservedly saw Real take the lead as they dominated the opening half and went close to scoring at least three other goals.

Ronaldo began the move inside his own half before the ball was played out to Bale wide on the left.

The Welshman, playing back in his birthplace, raced forward and then sent a deadly accurate, swirling 40-metre cross-field pass into Ronaldo's path.

The Portugal forward, who ran more than 50 metres to get into a scoring position, slid the ball home under Sevilla goalkeeper Beto to put the European champions ahead.