New Zealand sailors Peter Burling and Blair Tuke have won gold in the 49er at the Olympic test event in Rio, while Alexandra Maloney and Molly Meech took silver in the 49erFX class. 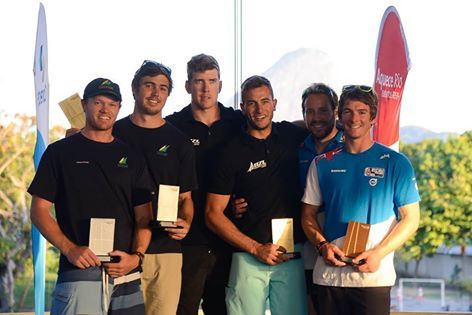 Burling and Tuke broke an overnight points tie with the French pair to secure the gold medal with three solid medal races.

Their second, fifth and fourth places were enough to win the title by eight points, and continue their clean sweep of victories across all the major Olympic 49er class regattas they've contested since winning Olympic silver in 2012.

Australians Nathan Outteridge and Iain Jensen came through for the silver and the British pair Alain Sign and Dylan Fletcher pushed out the French for a podium finish.

With the women's 470 set to wrap up Sunday and the reigning Olympic and world champions Jo Aleh and Polly Powrie sharing the lead, the New Zealanders are in good shape for a three-medal haul.

The Finn and Nacra 17 classes both wrapped up in Brazil. In the Finn Andrew Murdoch was sixth, while team-mate Josh Junior ended the series in eighth, and in the Nacra mixed multi-hull Gemma Jones and Jason Saunders finished sixth.

In the Laser Radial Sara Winther missed the chance to sail the medal race and finishes 11th.