The New Zealand cyclist Linda Villumsen says after missing out on past glory, gold is everything to her, following her women's individual road time trial win at the Commonwealth Games in Glasgow. 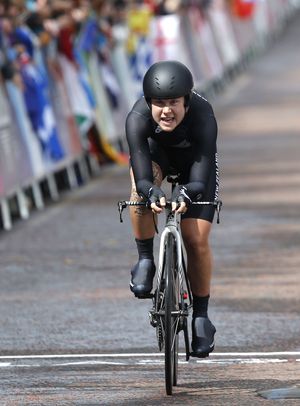 The Danish-born Villumsen was the top seed for the event and started last and recorded the quickest time over the 30km course, finishing just over six seconds ahead of Englishwoman Emma Pooley.

Villumsen, who came in at 42:25.46, says the gold means more than any words can describe after four years spent working towards it.

Villumsen is a five-time World Championship medallist and won silver in the time trial at the Delhi Games in 2010 and she's delighted to have finally won a major title.

She says gold is everything to her, and she's tried being second and third and fourth so many times now and it's something she personally really needed at this stage in her career, as well as to win something and actually be on the top.

Villumsen hopes it will set her up well for September's World Championships in Spain.

Waikato's Jaime Nielsen was fourth, a minute and four seconds behind.