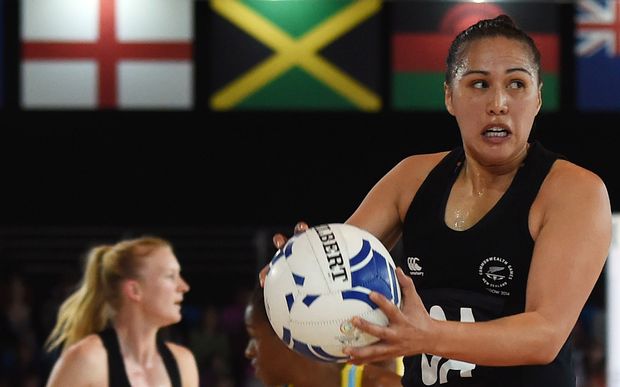 Liana Leota filled in at goal attack in the win over St Lucia. Photo: PHOTOSPORT

Playing out of position, the shortest member of the Silver Ferns side Liana Leota was the star turn at goal attack.

Erring on the side of caution in giving shooters Maria Tutaia and Cathrine Latu extra recovery time for respective foot and calf strain injuries, coach Wai Taumaunu sprung a surprise when she put the diminutive midcourter Leota into the starting goal attack role.

Leota has played that position in club netball, but never on the big stage.

Unbeaten through their first four matches, New Zealand turned in a slick and powerful performance ahead of their last pool match against Jamaica which will determine the order of the semi-finals.

A few months after giving birth to her third child, Leota showed she was no slouch in her new-found role, slotting the first goal of the match as the New Zealanders got off to a sizzling start.

Recovered from a rolled ankle in her debut match against Scotland, Ellen Halpenny made an appearance in the fourth quarter as the New Zealanders continued to grow in confidence and importantly, retained their consistency to finish strongly.

Leota returned to the more familiar wing attack role after delivering an impressive 19 goals from 26 attempts in a memorable outing.