The Colombian defender Juan Camilo Zuniga will not be punished for the tackle on Neymar that left the Brazil striker with a broken bone in his back and forced him out of the rest of the World Cup. 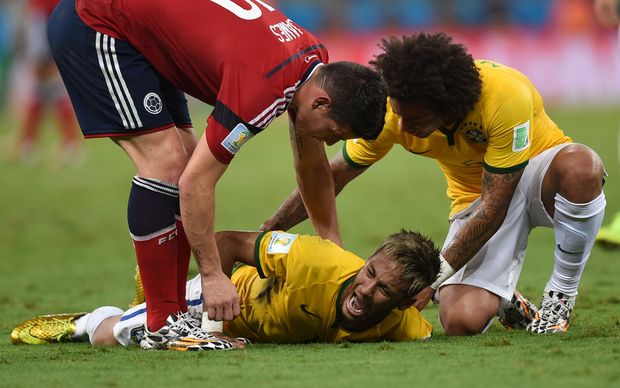 After investigating the incident from Saturday's quarter-final, won 2-1 by Brazil, FIFA's Disciplinary Committee has ruled that no retrospective action could be taken.

In a statement, football's world governing body said their own rules prevented them reopening the case because the incident had already been dealt with by the referee on the pitch.

FIFA also didn't consider Brazil's appeal against captain Thiago Silva's yellow card that will keep him out of tomorrow's World Cup semi-final against Germany, the governing body saying there's "no legal basis" to grant such a request.

The defender was booked against Colombia for blocking keeper David Ospina as he was taking a kick, and as it was his second of the tournament he was automatically suspended.

FIFA, in a break from its standard formal statements, expressed its disappointment that Neymar - one of the host nation's most popular and charismatic players - had been ruled out of the World Cup because of the injury.

But FIFA says the extent of the injury and the profile of the player involved could not have any bearing on their disciplinary rules.

Neymar's premature exit from the World Cup provoked a mixture of shock and anger in the samba nation.