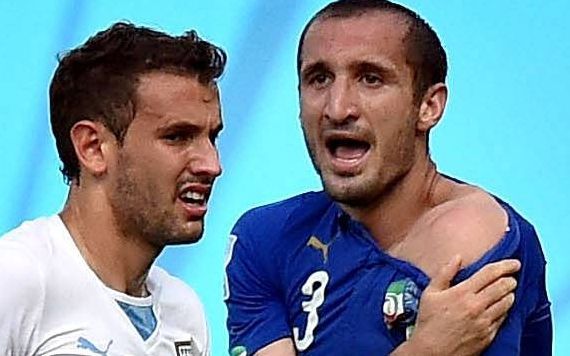 The disgraced Uruguay football Luis Suarez has finally apologised for biting Italy defender Giorgio Chiellini during their World Cup match and vowed there would never be a repeat of the incident.

After initially denying that he bit Chiellini, Suarez issued a carefully worded statement this morning admitting his offence.

"The truth is that my colleague Giorgio Chiellini suffered the physical result of a bite in the collision he suffered with me," Suarez said in a statement published on his Twitter account.

His admission came days after he was expelled from the World Cup and banned for Uruguay's next nine competitive international matches and from any involvement in football for four months by FIFA.

Suarez had steadfastly denied biting Chiellini and wrote a letter to world football's governing body saying he had simply lost his balance and fallen on the Italian.

But FIFA ruled that he acted intentionally and promptly handed him the longest ban ever imposed on a player at the World Cup, prompting fury in his South American homeland, where he was given a hero's welcome on his return.

FIFA later explained that Suarez was given a heavy punishment partly because he had twice before been banned for biting but also because he had shown no remorse.

"After several days of being home with my family, I have had the opportunity to regain my calm and reflect on what occurred during the Italy-Uruguay match on 24 June," Suarez said in his statement.

"For this: I deeply regret what happened; I apologise to Giorgio Chiellini and the entire football family; I vow to the public that there will never again be another incident like (that)."

Shortly after Suarez apologised, Chiellini replied: "It's all forgotten. I hope FIFA will reduce your suspension."

The Uruguayan Football Association (AUF) has notified FIFA that it intends to appeal against Suarez's punishment.

Uruguay now have until next Monday to submit their written reasons for the appeal.