The deputy Prime Minister is unapologetic for labelling beneficiaries hired to work on farms as "pretty damned hopeless". 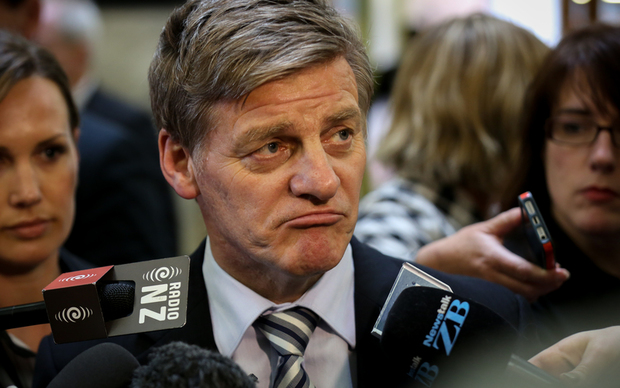 Mr English made the comments at a Federated Farmers meeting last week, saying many people seeking jobs through the Ministry of Social Development did not show up or stay with the job.

"A lot of the Kiwis that are meant to be available [for farm work] are pretty damned hopeless. They won't show up. You can't rely on them," he said.

"But we can't leave that problem unsolved, which is in the long run your problem as well as ours," Mr English told the farmers.

He went on to say there was "a cohort of Kiwis who now can't get a license because they can't read and write properly and don't look to be employable - you know, basically young males.

"And if we don't work together to get them working, then they'll be with us a long time doing nothing."

Mr English told Checkpoint with John Campbell he wasn't writing young New Zealanders off, but more needed to be done.

"They're not literate and numerate and we've got to work towards individual support for people in those cases, and then there's others who do have some capabilities, but ... we go to the trouble of getting them a job but it's a sort they don't do enough."

"There's a number of lessons. One is, if it's work they just can't do and they're never going to do we've got to find somewhere else to refer them. We've got to find different sorts of jobs.

"So the feedback from the farming community telling us these kids can't do these jobs, you've got to stick at it, you've got to learn from it - of course you're not writing them off.

"No one's going to have an interview with someone they don't think is capable of doing the job."

Since his initial comments he had come under fire from opposition parties and unions, who said his comments were disgraceful and the government had given up on young people.

The Labour Party accused Mr English of "writing off a whole generation of New Zealanders", and said it was the government that was "useless" for "not having faith in their own education system".

The Council of Trade Unions wanted Mr English to apologise, and said it was a foolish thing to say.

Green party co-leader Metiria Turei said it showed that the Government had an arrogant attitude towards working people.

"They treat those New Zealanders, who are struggling, with contempt. There is no real respect for the fact that ordinary New Zealanders are finding it harder and harder to make ends meet and to get decent jobs," she said.

"It is a real case of the Labour Party once again trying to smear a National party minister and using misinformation to do that", Mr Key said.

Beneficiary advocate Kay Brereton, said people didn't turn up for farming jobs because they were forced to work in unsafe environments, and only get paid for 40 hours a week, when in reality they were on the job a lot longer.

But she said there was a problem with a lot of beneficiaries being able to read and write.

"These people are not actually employable at present," she said.

The vice chair of the Otago Young Farmers club said Bill English's comments were "right on the mark".

"The Kiwi workforce, the ones we've had, have been very lazy and would rather go home and watch TV than do that little bit extra to make the cows happy. In the last couple of years I think it's a lot worse."

In the last few months there had been more skilled New Zealanders available because the dairy downturn was forcing people to cut staff, Mr Marshall said.

"I'm not sure how to make it change - putting more onus on the guys to perform probably. They seem to think 'they get their paycheck, that's all that matters', whereas they really need a bonus or some sort of work scheme to work harder."

Mr Marshall said he was glad Mr English had stood up and said what employers in the farming industry already thought.

"I think he's on the money and good on him for standing up and saying it really."

"I don't think it's insulting that people think that, people need to come out and actually see there are a lot of guys and girls out there, New Zealanders, who do work really well, but there's a large number who give everyone else a bad name.

"So it's about weeding them out and making people aware there are more than just those poor ones, but there are a lot of poor ones out there."