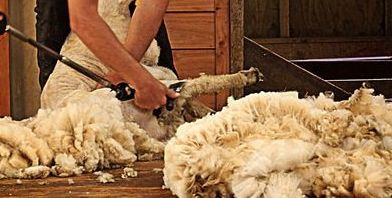 "All the pace was on as Gavin Mutch ripped the first sheep out in under 38 seconds, it was all on from there. The four competitors were all under 16 minutes for the 20 sheep, so you can just imagine the pace that was going.

Canterbury shearer Tony Coster added the New Zealand Circuit title to the fifth PGG Wrightson National title he won at the Golden Shears four weeks ago, becoming the first shearer to win both all-breeds titles in the same season since 2007.

Coster declined a position in a New Zealand team to tour UK this year, and Shearing Sport New Zealand chairman Sir David Fagan said Kirkpatrick had accepted the spot, and would tour with Smith.

Mr Laing said a key feature of the championships was the whānau aspect, with a number of competition successes connecting families.

"For example, John Kirkpatrick - he won the North Island of the shearer of the year final on Friday night... his daughter won the junior wool handling title on Thursday.

"Joel Henare and his wife Erica topped the shearing sports New Zealand rankings in the open and senior wool handling for the season."

Next year's world championship will be held in Invercargill in February.