Scientists in Australia have mapped the genome of the blowfly and say it's a breakthrough discovery as they try to find effective control measures for the parasite. 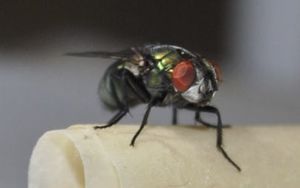 The blowfly. Photo: University of Melbourne

The blowfly, Lucilla cuprina, is a huge problem for Australian and New Zealand sheep; the female flies lay their eggs in sheeps' skin, and the resulting flystrike leads to a slow and painful death for the sheep.

University of Melbourne post-doctoral research fellow Clare Anstead, a member of the research team which mapped the fly's genome, said blowflies had been extremely difficult for farmers to control because they developed resistance to insecticides.

Understanding the genes would allow scientists to create better control methods, she said.

"We've identified all of the 14,544 genes that make up this organism and it's important that we've done this because we have a better idea of what makes this parasite a parasite.

"It's never been done before, and it's completely novel in that before the genome had been decoded, there was a tonne of research that had been done over the years into figuring out what genes were involved for insecticide resistance, what genes were involved in the parasite host interactions with the sheep, and now that we've decoded all of these genes, we'll have a better idea about how to go about prevention and control of this parasite."

Dr Anstead said the blowfly caused millions of dollars worth of losses to both Australia and New Zealand's sheep industries.

"The sheep blowfly is responsible for around $40 million of damage a year, and something like 1.3 to 2.3 million sheep are affected in New Zealand. So you're looking at around 250,000 dying from flystrike every single year."