Help is on its way for farmers and rural communities left stranded by the weekend flooding that hit southern Taranaki, and the Whanganui and Manawatu-Rangitikei regions. 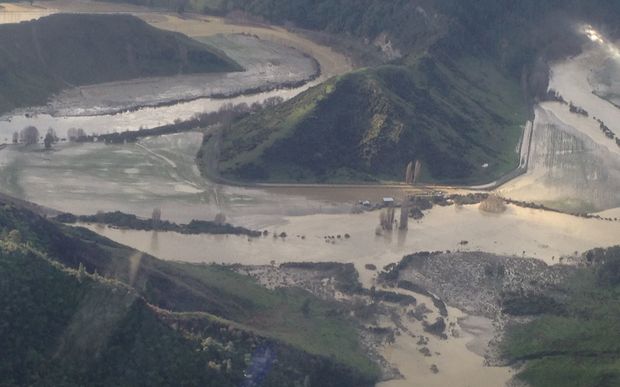 Fonterra said about 20 dairy farms had been severely hit by the floods, with three having to dump milk because tankers had not been able to reach them.

The dairy co-operative yesterday activated its emergency response team and contacted farmers in Manawatu-Rangitikei and Taranaki to see who needed help.

Head of co-operative affairs for the central district Dallen Olson said 20 to 25 farms in those areas were in need of immediate assistance.

"A lot of the issues are around, obviously fences down, some of the sheds are still full of water, a lot of slips and tracks that have been covered in dirt.

"There's also a requirement for stock grazing and feed, so stock on some farms are running out of grazing land and they require some further grazing land as well as feed.

"There hasn't been any loss of stock, but I guess in the coming few days we will get a better picture as to whether that will happen or not."

Mr Olson said the worst-hit farms were widespread, with some people saying it was worse than the 2004 floods.

Late yesterday, Fonterra was still struggling to reach three farms, which had been advised to dump their milk.

Rural support trusts in the Taranaki, Whanganui and Manawatu regions are working together with Federated Farmers to organise help for those who need it.

Ruapehu-Whanganui Trust coordinator Lyn Neeson said they were organising relief on a number of fronts.

"We've sent out a North Island call as well as a local call for people to go down and help the farmers fix up fences for their stock, maybe clear slips, clear trees.

"So we've sent a call out for any farmers that want to go down and help for a few days because of course, those hill country farmers helped other regions in adverse events in the past.

"We've also requested digger drivers and fencers, because we know they'll be in demand in the next month at least.

"We've also opened up the Federated Farmers 0800 feed line and are co-ordinating feed for either grazing off farm, or feed to be delivered on farm, because a lot of the low-lying area is the cropping area that would have been these farmers' winter feed, so they're under water and it looks like it will be a tight winter if we don't get some feed into that area."

Meanwhile, the Government has also stepped up support by activating the Enhanced Task Force Green programme to help with clean-up operations in the Whanganui area.

And the Minister for Primary Industries Nathan Guy was expected to make an adverse weather event declaration tomorrow when he visited flood affected areas in Rangitikei, triggering further support measures.