Farmers in inland Canterbury and Otago are battling to get feed to their stock today after snow storms yesterday and overnight. 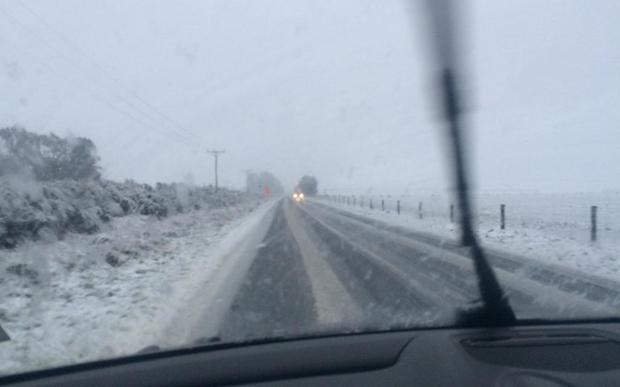 Snow on the road between Ashburton and Methven on Thursday. Photo: Twitter / @demileesinclair

Thousands of customers are without power in Canterbury due to snow and tree damage to lines, and several highways around the region remain closed.

On the South Island's West Coast, it is rain, not snow, that is the problem - with up to 400 millimetres of rain falling in 24 hours, causing flooding in Hokitika and inland from Greymouth.

Richie Bruce, a farmer at Stavely in Methven in mid-Canterbury, said the area has had half a metre of snow - the worst he had seen in a decade.

"Now that there's big machinery available, most of the farms will be able to cope with it without too much trouble," he said.

"We just hope we don't get too much frost to freeze the snow and make it hang around - because it is so deep that it will give trouble moving cattle through frozen snow. That's the fear that I've got.

"The big problem of course is if they are on fodder, it's all covered, so they'll be relying on hay and baleage of which there's a limited supply this year."

He added that sheep could be slow to acclimatise - which was also a major problem.

"When you've got snow over all your winter feed, this is a major problem of how you can get your sheep onto something [else]."