A highly pathogenic strain of avian influenza hitting the poulty industry in the United States is having traumatic emotional and financial impacts on farmers. 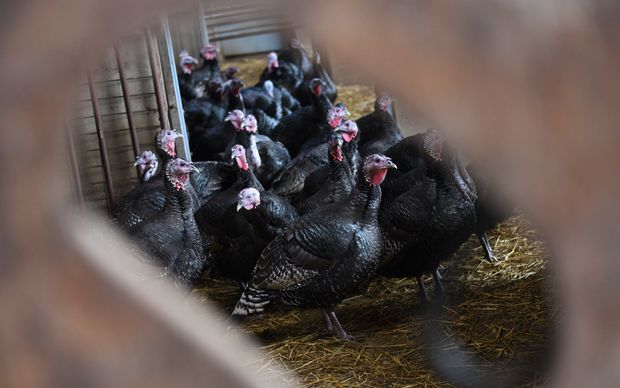 Turkeys in the United States have been hit by avian influenza. Photo: AFP

More than 20 million birds have been killed or condemned and three states - Wisconsin, Minnesota and Iowa - have declared a state of emergency, Reuters reports.

Minnesota Turkey Growers Association executive director Steve Olson told Radio New Zealand that in Minnesota alone, about 5.5 million turkeys and chickens had either died from the virus or been culled by Department of Agriculture officials.

"This is the first time Minnesota has had High Path Avian Influenza (H5N2) and it showed up in early March and it is a virus that does kill the birds, so once it gets into a flock it has pretty much 100 percent mortality and kills all the bird in that situation," he said.

"Minnesota is the number one turkey producing state in the United States - we'll raise about 45-46 million birds each year and that, in combination with the fact that we have a lot of water, a lot of lakes, in Minnesota means we also have a lot of water fowl.

"Our strongest theory is that the virus is being spread by water fowl in their droppings or in their feathers and it's getting tracked into the barns either on equipment, people or blowing into the barns."

Mr Olson said turkey farmers had been doing it tough; if the virus killed their birds they were left totally out of pocket but they were compensated if officials culled their turkeys.

"It's a pretty emotional impact on farmers, too, because first of all they watch this virus kills their flocks and then they also have to put down healthy birds.

"And their focus has always been on 'how do we do a better job on keeping birds healthy', so this has been a pretty tough situation for turkey growers that have had infected flocks."

Some media reports had suggested the avian influenza outbreak could lead to a shortage of turkeys for the table for the Thanksgiving Day national holiday in North America in November but Mr Olson did not believe that would happen.

Turkey production in the United States totalled about 240 million, so the five or six million affected was only a small percentage, he said.