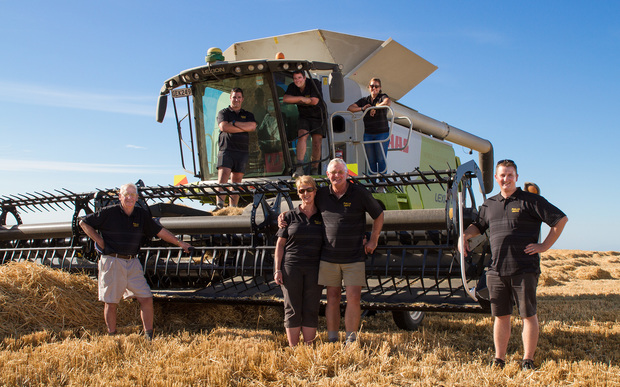 Warren and Joy Darling - and family - with their record-breaking barley crop. Photo: SUPPLIED

Warren and Joy Darling of Poplar Grove, just south of Timaru, are the Guiness World Record holders for the largest barley yield of 13.8 tonnes per hectare.

They attempted the record on 23 January and it was ratified yesterday, meaning they have taken it off a Scottish farmer who has held it for more than 25 years.

Mr Darling said they had been building up organic matter and nutrients in the soils over the last eight years but the weather also played a major part.

"The real result came from the perfect season - rain at the right time, coastal environment gave us our cool nights and dewy nights ... and then we got the perfect harvest season with the hot temperatures for the harvesting," he said.

"We took some yield assessments prior to the harvest of this block and we knew it was in the 13 tonne [range] - and then, on the day, it wasn't until the last truck of barley was weighed, the calculators came out and we realised we were at 13.8 and the corks started popping."