A dispute with the Otago Regional Council led a couple to drive 120 kilometres to dump a load of horse dung on the council's driveway in Dunedin yesterday.

Robert and Sylvia Borst said changes to the council's regional water plan would eventually stop them from being able to farm because they would not be able to meet the new restrictions. 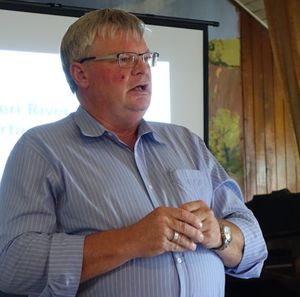 They said they were hoping for a long-term farming consent around revised restrictions but further delays on Friday afternoon were the last straw.

The council said it still hoped it could resolve the dispute with the North Otago farming couple.

Its chief executive, Peter Bodeker, said the Borsts' protest was out of the blue and not very pleasant.

"It's an unfortunate incident and we don't condone those actions," he said.

"It was a significant odour; it disrupted our neighbours and our staff and certainly we don't condone those actions."

Mr Bodeker said he personally asked the Borsts twice into his office to discuss their case but they declined.

Mr Bodeker said for some months the council had been discussing a resource consent application lodged by the Borsts.

He said a farmer was able to apply for a consent to discharge if they felt they could not meet new restrictions around the level of nutrients that can be released.

"The plan change says that the farmer needs to show how they are going to achieve getting from a non-compliance date to a compliance date.

"That's what the resource consent opportunity is for farmers that don't think that they are able to meet the requirement by 2020, so this is the discussion that we're having with the Borsts about how they might do that."