Farmers are being urged to call their vets if they are unsure about sending slim stock to slaughter, following a widely distributed photograph of bony cattle being transported last week. 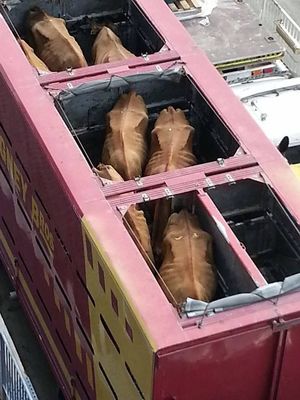 The Jersey cows, on their way to slaughter Photo: Facebook

The photo showed a truckload of Jersey cows with protruding bones on board a ferry from Picton to Wellington. It has been shared on Facebook more than 8500 times since it was posted on 8 March.

The Ministry for Primary Industries (MPI) said an investigation into the actions of the farmer and the transport company was still underway, but it would not provide any further information.

However, Radio New Zealand understands some of the cattle had to be euthanised at an abattoir.

Federated Farmers national dairy chairman Andrew Hoggard said, because of the widespread drought in the South Island, feed supply was tightening and farmers needed to be making decisions around stock numbers before it was too late.

But he said farmers and truck drivers were both legally responsible for making sure stock was fit for transport.

"Obviously the MPI, the vet inspector at the works, is the ideal person to be able to physically look at these animals close-up, and they've obviously determined that there were in fact some animals in that line that were in poor condition."

Mr Hoggard urged people to call their vets if they were unsure about whether stock were fit enough to be transported.

"If they look at this case and go, 'Oh jeez, if I send my stock to the works or whatever, I'll get pilloried; perhaps I cross my fingers and hope the feed grows suddenly and everything becomes rosy.' They could actually create a worse animal welfare case."