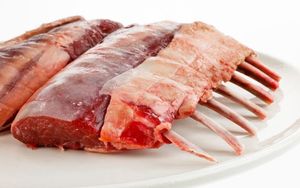 The report, backed by Beef and Lamb New Zealand funding, analysed what needed to be done to lift the performance and profitability of the industry.

It identified gains of more than a billion dollars to be made from the big four companies, AFFCO, ANZCO, and the two co-operatives, Silver Fern Farms and the Alliance Group, in co-operating rather than competing in stock procurement, processing and marketing.

It also looked at the savings from making a fresh attempt to merge the two farmer owned co-ops.

It said over capacity was the number one issue confronting the industry.

Analysis by an international consultancy firm, GHD, suggested processors could close about a third of the plants they operate and still have enough capacity to process stock at peak times.

The report's co-author and editor Ross Hyland outlined what the current inefficient structure is costing farmers, in terms of the payments they're getting for their stock

"There's $445 million every year that's currently a cost to the industry, and when you break that down you'll see there's $230 million in the ovine (sheep) sector. And when you break it down further, it works out at $10.95 a lamb or 60 cents a kilo.

"Similarly with beef, you'll see (a cost of) $93.48, or 34 cents a kilo. When you start to talk about the farmer who's got four thousand lambs he's getting killed each year and 300 cattle, that's 72,000 dollars it's currently costing that farmer, year on year.

"So we think there is a huge opportunity for change."

Mr Hyland said MIE was not advocating merging the big four companies into one, but he said they all accepted that the meat industry needed to change.

"It's not just about collapsing the big co-ops into one, it's about bringing the ANZCOs and the AFFCOs along for the ride, not to put them into one big entity, but every one of the big four understands that things have to change."

Farmers have shown strong support for a Fonterra type structure, at least with the merger of Silver Fern Farms and Alliance.

But meat companies have not rushed in to comment at this stage.