Fonterra has been forced to trim its milk supply forecast for the season as the flow from parched pastures dries up. 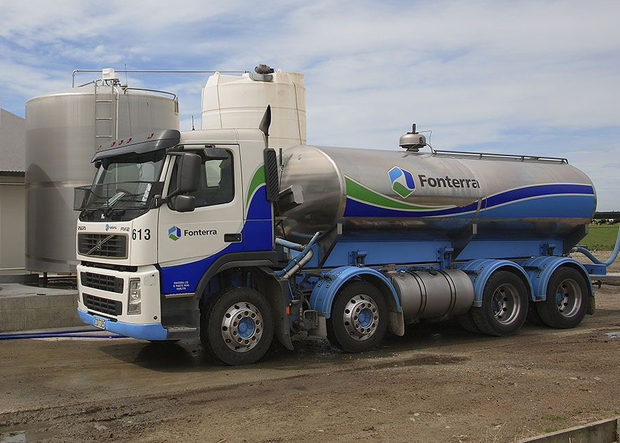 Up until last month the co-operative's milk collection was still running ahead of last season, in line with its prediction of a further increase in production.

But Fonterra is now expecting this season's milk harvest to be more than 3.3 percent down on the amount of milk collected last season, as farmers respond to the increasingly dry conditions and low milk payout by turning off the tap.

The forecast is also 6.1 percent lower than at the same time last season.

"Right through in December we were having quite good milk collection, but the heat in the latter part of December and certainly through into January has meant a revision of the forecast. As at today, our milk collection on a daily basis is more than six percent lower than at the same time last season", he said.

"Clearly weather is playing the most significant part, but certainly our forecast payout for the season is meaning that we are seeing farmers revert to more traditional farming practices and therefore, putting less reliance on supplementary feed, so reducing their input costs."

Miles Hurrell said Fonterra suppliers were already drying off their cows in some areas, where pasture conditions had declined markedly since mid-January.

Dairy farmers in one of the driest parts of the country, South Canterbury, are drying off cows, reducing daily milking, and taking other steps to cut milk production, well ahead of when they would normally turn off the milk flow.

He said many farmers have dried off at least some of their herd, whilst the lowest producers have also got rid of some cows.

"They are just reducing their herd to their core capital stock that they want to milk next season, so they're basically taking steps now that they wouldn't normally implement to mid-late April and that's just the lack of feed. Also a big driver this year - if this drought was occurring in the 13-14 season, on an $8.40 payout, the amount of supplement that farmers could afford to feed their stock would be a lot higher and that would perhaps keep us milking some of those cows for a bit longer, but on a $4.70 payout, the economics of milking those animals is pretty marginal."

Ryan O'Sullivan, who farms near Fairlie, said South Canterbury had been dry since June, and that had reduced the amount of silage and other feed farmers had been able to store, as well.

He thinks without significant rain in the next few weeks, Fonterra may be forced to cut its milk collection forecast even further.

"It's probably accurate at this point in time, but if we don't get serious rain in the next two or three weeks, there will be a number of farms dry off completely. If that occurs on a widespread basis, that forecast could be significantly lower, I believe."

Mr O'Sullivan said rain was forecast for the district for the weekend, but it had not yet eventuated.

In line with its reduced milk forecast, Fonterra has slashed the amount of product that it plans to offer on the Global Dairy Trade over the next six months.

That is more than 40 percent below what it offered last season for the February to July period.

But Miles Hurrell said it would still be able to fill the orders it had.

"At this point in time we don't see any change to fulfilling our current order book, however we will be seeing a reduction of volumes on GDT over coming months."

Mr Hurrell said it may mean cutting back on direct sales to customers to some extent, but at this point the current contract book would remain as it is.

He said the reduced milk supply would also impact on Fonterra's returns and bottom line.

"But we felt it was important, once we saw this information coming through, that we got that out to our shareholders as soon as we could."

Mr Hurrell said even parts of Waikato, the country's dairy heartland, were getting dry now.