This year's oilseed rape harvest is likely to be a record breaker, a vegetable oil processor and marketer says. 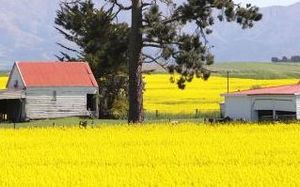 The oil, also known as canola, is extracted from the seed for the food market and the meal by-product is sold to farmers as supplementary stock feed.

Managing director Nick Murney said the crop liked sunshine and moisture and had performed well in this year's conditions.

"The crops established well last year in the autumn and had a reasonably kind winter and got good tap roots down," he said.

"As it's come through the dry spring and summer the plants have managed to get moisture from deep down in the soil and that's pushed the crop through and it's helping it to yield well.

"It is early, we haven't got all the crops in but things are looking promising and it looks like it's going to be a record harvest on volume and yield for Pure Oil."

He said official adjudicators checked the quality and the final weight was 6.31 tonnes per hectare, surpassing the previous record of 6.14 tonnes set last August by an Englishman.

Mr Dennison said while the dry weather had not been good for pastoral farmers, the fine weather had helped with the crop's success.