Farmers in Southland have been queuing up for supplies of a small parasitic wasp used to fight a serious pest. 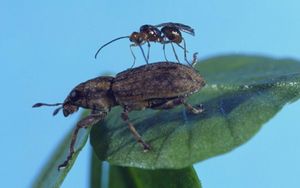 The female wasp lays eggs in the weevil which eventually kills it. Photo: AgResearch

Scientists have warned that farms in region could be hit hard by the clover root weevil again this summer - one of the worst pasture pests that attacks and destroys clover.

AgResearch scientist Colin Ferguson said more than 200 farmers had attended workshops in Southland to find out more about the pest and where and how to release the wasps.

Mr Ferguson said the aggressive female wasps laid eggs inside a female weevil to kill it - and were very successful.

"Each wasp is capable of parasitising up to 60 weevils and we can get through about four generations of the wasps in a good year if temperatures are warm enough.

"So the potential for even a single wasp to build up very rapidly is there and that's the whole idea of trying to make the releases now at this time of year - so we can give them as much time as possible over the summer to really get stuck in."