A group of pipfruit growers north of Nelson are facing financial ruin after their orchards were wiped out by a violent hailstorm last week.

Primary Industries Minister Nathan Guy today visited growers in the worst-hit areas of Riwaka and Moutere where visibly emotional orchardist Steve Moriarty told him the damage has been gut-wrenching. 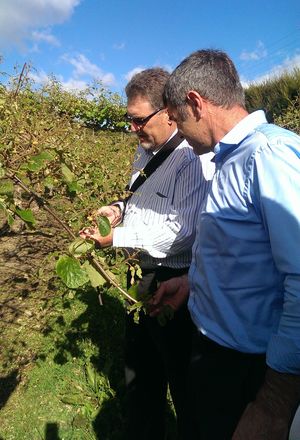 Early estimates suggest a $40 million hit to the local economy through the loss of pipfruit, kiwifruit, hops and equipment. But the full extent of the damage to growers, their crops and the wider economy would not be known for some weeks.

Orchardist Ian Palmer, who is also Pipfruit New Zealand's co-ordinator for the hail response, said the damage has been massive.

"Here in Riwaka ... the hail was nearly a foot deep on the ground and that's an unprecedented event. There's estimates that it could be well in excess of a million cartons of apples lost and I think that's reasonably accurate, probably a hit to the district of about $30 to $40 million."

"They have an absolute 100 percent total write-off of their whole apple crop and also huge damage to their kiwifruit crop. They have a packhouse that will not be operating this year. So in terms of their staff and even permanent staff, there is a real dilemma for them to work through. So they've got a tough year."

Many growers had opted not to take out hail insurance on their orchards in a bid to keep costs down.

Nathan Guy said it was sobering to see the destroyed netting and fruit.

"I saw some photos last week where there were wheelbarrows of hail and large balls - so to come and see it now and see the damage there is, is quite depressing. To see the canopy that's been shredded and stripped by the hail will cause quite a bit of heartache for kiwifruit growers, and now we're going to see an apple orchard.

It's good to see it firsthand - because pictures can only tell you so much and I think we're talking about sort of 40 local growers and in the last 24 hours -15 of them have filled in the survey that's only just gone - out so they're well-engaged in putting their hand up and saying, 'Hey we need a bit of help here how can you provide some technical advice?'

"Good to be on the ground, good to see it firsthand and we'll do what we can to help," the minister said.