A group of Hawke's Bay prisoners has taken up knitting after being shown how by volunteer Coralie Curtis.

For the past year, Ms Curtis has been teaching the men how to cast on and cast off without dropping too many stitches. The result has been classy beanies for babies and toddlers, which are donated to Plunket at Flaxmere. 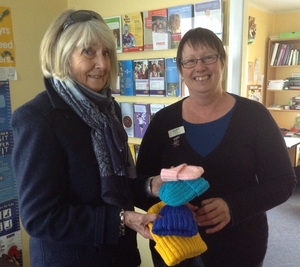 "Specialist blankets for the special baby care units at the hospital. That involves natural fibre wool, so it's slightly different to what they've been doing.

"Poppies for the memorial at the National Army Museum - that's a very difficult design in comparison to a beanie - so there's a little bit more concentration required there. Then of course, more clothes to support Plunket."

Mr Massingham says it is not the sort of thing you would expect to happen in a prison, but the group volunteered. "The fact that they can give something back to the community is very important to these guys."

The regional prison is keen to get donations of wool to continue the knitting programme.

Mr Massingham said it complements other education, training and group therapy that prisoners are doing, including farming, building up skills they can use after they are released.

"We have our own staff who support our farming across the site, so we have a number of cows at the prison and they're part of our dairy network across the country.

"We have organisations like Taratahi ITO who come in and train our guys in level two in agricultural studies. We employ people out in the community on a release to work programme, in the horticulture, viticulture industry. Obviously, being in Hawke's Bay, there's the ability to do that, and we are also getting into bee keeping."