The forest industry thinks it is seeing the start of a recovery in the export log market, but says it is not going to happen quickly. 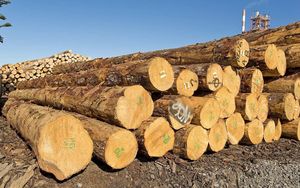 Foresters will be looking for a gradual recovery in prices and demand during the rest of the year. Photo: PHOTO NZ

The prices and demand slumped earlier this year when a glut of logs built up in the main market, China.

There have been signs recently that prices may have bottomed out, as China starts to work through the surplus.

Forest Owners Association technical manager Glen Mackie said foresters would be looking for a gradual recovery in prices and demand during the rest of the year.

"Inventory levels in China got out of control. A whole range of exporters were sending logs into China and they simply ended up with too many logs in the ports and not enough being drawn off, so therefore an excess of supply resulted in a price correction", he said.

"The inventory hasn't cleared yet, it's just slowly dropping, so that's going to take a little bit of time while the inventory continues to drop, but we are expecting things to improve over the remainder of the year."

Mr Mackie said it was the smaller scale and newer forestry operations that had been hardest hit by the downturn, because their costs tended to be higher.

"A lot of the larger forests are actually on the second or third, or some of them are on a fourth rotation, so their cost structures are much lower than forests that are on their first rotation", he said.

"Also, newer forests that are just coming on stream for the first time now, they tend to be the ones that are further away from the ports and also on the steeper land where the harvesting costs are higher, so they're much more sensitive to price fluctuations."

Mr Mackie said South Korea and India had been taking extra logs while China works through its stockpile.