The horticulture sector has confirmed that a new Government-backed healthy food labelling system won't be used for fresh fruit and veges. 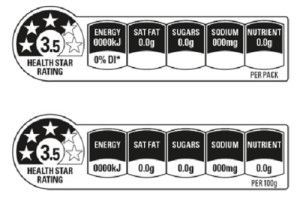 Food Safety Minister Nikki Kaye announced in June that the Government would be joining Australia in adopting the health star rating system, which uses stars to show the nutritional value of food products.

It's a voluntary scheme designed to be used on packaged food products.

The announcement left people in the horticultural sector wondering how it would be applied to fresh produce and whether it would affect their use of the "five plus a day" logo.

The produce industry body United Fresh investigated and general manager Paula Dudley said the answer was that it would not be applied to fresh produce.

"We made contact with the Ministry for Primary Industries and the secretariat of the front of pack labelling group in Australia and they came back to us and said that it wasn't a system intended for fresh produce at all," said Ms Dudley. "It's actually for grocery items".

"You could put fruit and vegetables into their on-line calculator but it wouldn't always come up with five stars because it wasn't intended for fresh produce. If anyone tried to, it would be confusing and misleading".