A further plunge in international dairy prices has left farmers feeling nervous about where their milk payouts may be heading this season.

Prices fell by a further 8.9 percent on average in the overnight Global Dairy Trade auction, pushing the price index to its lowest point since late in 2012. 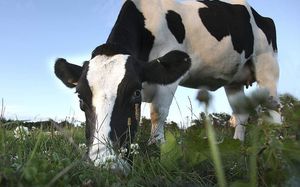 But he says they are apprehensive about how far prices may fall below dairy cooperative Fonterra's current forecast of $7 per kilo of milk solids.

"I guess in the next month or two they'll be waiting for some guidance from Fonterra to see where they see it. And they could potentially come out with a 50 or 70 cent drop on the expecting payout for this coming season.

"When they do announce it, I don't think it will be unexpected. If you look at the Fonterra (global dairy trade) results from last night, the contract pricing for whole milk powder for the next five months, all the way to December, is in the three thousand to three thousand one hundred dollar range, so the market price has no upside."

Mr Lewis said with the high New Zealand dollar and prices dropping, it is already getting difficult for farmers.

"We just hope that the six months from January to May will be a higher price and the New Zealand dollar will drop. If not, dairying farming will be in for a very lean season and there will be some cost-cutting, probably no or very few capital upgrades. And that will be felt by a lot of businesses in provincial areas."

Farmers also hope that the fall in international prices won't eat into milk payments for the past season, which still have to be finalised.

Fonterra's payout for the 2013-14 year currently sits at a record $8.40 a kilo, with a 10 cent dividend on top of that. The co-operative will confirm the final price in September.

Jacqueline Rowarth, Professor of Agribusiness at Waikato University, said on Wednesday it would be highly disruptive to farmers and their budgetting if it was trimmed back retrospectively, because of the latest international price falls.

"Any change in the payout for last season would seriously affect farmers' debt loading and their ability to pay back what they've invested over winter and what they actually budgetted on.

"Future budgets are still fairly flexible at this stage because we all know that things change at the beginning of the season in terms of payout. So it's the retrospective change that would be very difficult for farmers to manage."

Professor Rowarth said farmers have been taking advantage of the high prices last season to invest in improvements to their farms.

"There's been over the Waikato for instance, huge amounts of infrastructure investment during the winter, and that's been enabled by the high milk price for last season. I'm talking about things like effluent disposal, upgrading of milking systems, particularly methods of ensuring feed for cows, like feed-pads and shelters."