Battered Northland farmers are surveying the damage from the severe storm that's continuing to hammer parts of the north.

Extreme winds and heavy rain caused widespread power cuts through the north and flooding in some areas. 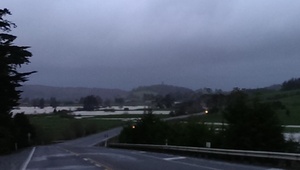 One of those is the low-lying area known as the Hikurangi Swamp north of Whangarei.

Evan Sneath, a dairy farmer at Hukerenui at the top end of Hikurangi Swamp, says about a third of his farm is under water and it's happened just as he's started calving.

"We had 148 mls of rain in the last 24 hours, so yeah, we've got quite a bit of flooding. There are three pockets on the swamp that have no power at the moment, so we've got no pumping. So unfortunately the water's just building up, we can't get rid of it."

Evan Sneath says about 30 hectares of his farm are under water.

"And that will probably be under for about five days, looking at it. That's how long it's going to take, probably, to get rid of the water."

A dairy farmer at Maungaturoto, Ashley Cullen, was still without power when Radio New Zealand spoke to him on Wednesday morning.

He says he's never experienced anything like Tuesday night's wind, and it's left a lot of damage.

"There are trees down, roofs off buildings and one of the major issues we've got at the moment: a big tree across the railway lines, right by our cow shed. So that's our main job for today, clearing that, and the more you go out the back of the farm, the more damage you find.

"The wind is still horrendous. I'm behind one of our sheds at the moment and I'm still getting buffetted ... oh, there's another tree just gone!"

Bill Guest, who farms in the Dargaville area, says the storm has also left a trail of damage there.

"North of Dargaville the power was out last (Tuesday) night. There was a report that a hay barn had been blown away and took out the local power lines up there at Aranga.

"It's been raining and blowing like hell and there would be a few barns gone last night.

Mr Guest says he's heard about a van being blown off the road south of Tokatoka. He says there were two fire trucks there and an ambulance was on its way to try and get the driver out.

Bill Guest says the only positive thing has been the rain, which will help western parts of Northland to recover from their second drought in two years.