Agribusinesses have been told that one of the lessons from Fonterra's botulism false alarm last year is to have a crisis management plan that can be put into effect straight away.

The advice comes from Jack Hodder, leader of the whey protein concentrate inquiry team which Fonterra's Board set up following the contamination scare. 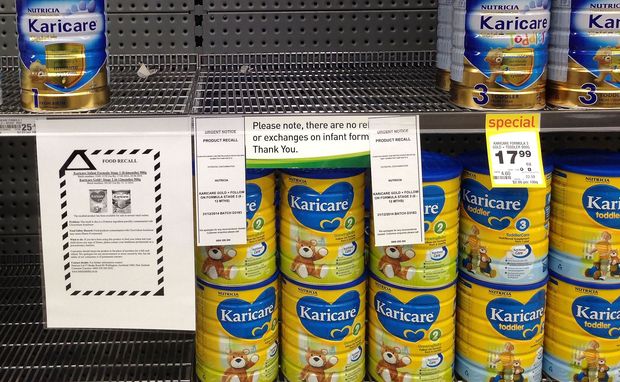 Baby formula made by Fonterra was pulled off the shelves of this Wellington supermarket last year after suspected contamination of the product. Photo: AFP (FILE)

Mr Hodder told the annual primary industry summit in Wellington that one of Fonterra's problems was its inability to trace early on where the suspect material had gone.

He said the company kept changing what it told the Government on that and ministers and officials started to lose confidence in what it was saying.

Mr Hodder said one of the big lessons the primary sector should take from the inquiry was to have a plan.

"Because, stuff happens. And when stuff happens you need to be able to react quickly and effectively. This is nothing unique to Fonterra, it applies to anybody, right down in fact to the level of the individual producing farm."

Mr Hodder said the inquiry should be telling those in the primary production business that it's essential to have a good management plan for crises.

"Now that's just common sense. If you are dealing with consumers in Asia, in particular China, it's not just common sense, it is absolutely critical. Otherwise you, and possibly all the rest of us, could be history quite quickly. That also is a lesson that comes from the WPC80 (inquiry) exercise."

Mr Hodder said as well as having a crisis management plan, companies needed to rehearse it.