Fonterra is confident that demand for dairy products will continue to hold up, despite falling prices for milk powder.

Falling international prices have led the cooperative to trim back its forecast payout to dairy farmers for the 2013-14 season to $8.40 per kilo of milk solids, with an unchanged dividend of 10 cents a share on top of that. 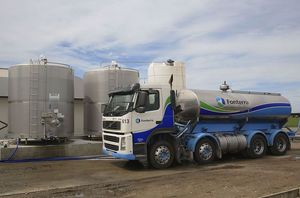 Wednesday's figure is 25 cents less than the previous forecast, but still significantly higher than last season's total of $6.12 and well above Fonterra's previous record of $7.90.

Fonterra has set its opening milk price for next season at $7, starting in June. Chairman John Wilson said that reflects the company's view of what will happen over the next 12 to 18 months.

Mr Wilson said Fonterra would confirm the final figure for this season's payout when it announces its financial results in September.

"I think all of our farmers understand very clearly that it is the forecast for a season that hasn't even commenced yet," he said.

''We will not be announcing our dividend expectations, so therefore the forecast cash payout until after we have approved the budgets in June.

"The milk price forecast is based on where we see community prices today, exchange rates today and what we see going out over the next 12 to 18 months.''

The New Zealand dollar rallied after the announcement, with ASB rural economist Nathan Penny saying the market was relieved that next season's payout forecast wasn't lower.

Federated Farmers dairy vice-chairperson Andrew Hoggard said while it was disappointing to have the payout lowered, it had to be kept in perspective.

"Still a damned good season. We'd always like that extra 20c more, but in the history it's been one of the best seasons around."

He believed a critical factor which would influence next season's payout was the weather in the Northern hemisphere; favourable conditions for growing grass there meant the payout to farmers here could fall considerably.

On the flip side, Fonterra would benefit if Northern hemisphere weather was unkind to farmers there, Mr Hoggard said.