Delegates at the deer industry conference at Methven in Canterbury heard on Wednesday about plans for revitalising the venison trade.

Demand and prices for New Zealand venison have been under siege in the main European markets, where it's having to compete with cheaper local deer meat. 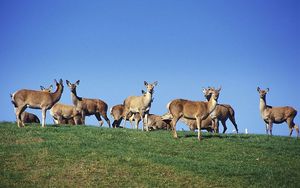 Demand and prices for New Zealand venison have been under siege. Photo: PHOTO NZ

The industry is aiming to find new markets and customers for New Zealand farmed venison by reducing its reliance on the traditional European game season.

Deer Industry New Zealand's chief executive, Dan Coup says as part of that it's considering whether to introduce Europe as well as China, to the Cervena brand, which has been used successfully in some other markets.

"Cervena is currently an appellation used in North America and Australasia. That means it's a mark that goes on packaging, along with company brands.

"We're looking at extending the use of Cervena, potentially into some smaller European markets, but also looking at the possibilities of China."

The deer industry is also working on an application for Government funding through the Primary Growth Partnership research fund.